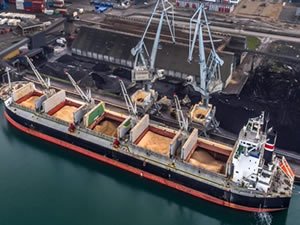 Of all the dry bulk segments it is the supramax sector that has experienced the most radical changes in age profile over the last two years, according to new analysis by Alphabulk.

“The age breakdown of the dry bulk fleet has undergone a notable shift in the last two years, as the bulk of the pre-financial crisis ordering has worked its way through the system,” Alphabulk noted in its most recent weekly report.

The supramax fleet has seen the most “drastic transformation” in the past two years, the analysts noted, with the proportion of ships below the age of five falling from 34% to 22%.

The sector has a relatively low number of vessels above 15 years but a notable 125 ships, or nearly 6m dwt, of 25 years and over.

Data from Braemar ACM from earlier this month shows that supramax newbuild deliveries peaked in 2011 and have been declining ever since.

This news is a total 3461 time has been read
Tags: Supramaxes experience radical shift in age profile

Endesa to Convert Algeciras Coal Terminal into LNG Bunkering PierSpanish power utility Endesa is planning to convert a terminal at the Port of Algeciras into a bunkering pier for LNG-fueled vessels.

Supramaxes experience radical shift in age profileOf all the dry bulk segments it is the supramax sector that has experienced the most radical changes in age profile over the last two years, according to new analysis by Alphabulk.

Methanol up for discussion at IMO this weekTwelve methanol-powered ships are already in operation with another nine on order, but inclusion in the code should shorten the time to approval and even lower the cost of constructing tankers, bulkers and containerships using methanol as fuel.
FRONT ROW
1/20
PHOTO GALLERY
12345678
TOP NEWS
YESTERDAY| THIS WEEK |THIS MONTH
AUTHORS
12
Video Gallery
12345678
All Rights Reserved © 2006 TURKISH MARITIME | İzinsiz ve kaynak gösterilmeden yayınlanamaz.
Phone : 0090 212 293 75 48 | Fax : 0090 212 293 75 49 |