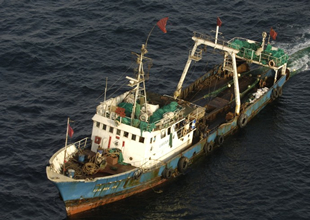 New Zealand has complained to Interpol over a pirate fishing boat with numerous names that is hunting lucrative toothfish in the Southern Ocean.

Interpol, on the request of New Zealand, Norway and Australia, has issued a "purple notice" appealing for information on the ship now known as Thunder and flagged to Nigeria but which is infamous for having different names and flags.

The Ministry for Primary Industries said this was the first time New Zealand has taken such action over suspected violations of international fisheries law.

Information is being sought regarding the individuals and networks that own, operate and profit from the suspected illegal actions of the vessel.

"Thunder has been operating under a number of names and flags over several years and we believe this is being done to avoid been caught violating international laws and conventions," Gary Orr, the ministry's manager operational co-ordination, said.

Thunder has been on the illegal, unreported and unregulated fishing vessel list of the Convention on the Conservation of Antarctic Marine Living Resources (CCAMLR) since 2006. Its illegal fishing activity in CCAMLR waters undermines the convention's conservation objectives.

It has deliberately changed its identity several times to avoid sanctions such as denial of fishing permits and permission to enter ports.

"It has used three identities interchangeably, including the use of removable name plates with different vessel names on the stern and pilothouse," Orr said.

The vessel was last sighted in the Southern Ocean northwest of the Cocos (Keeling) Islands by an Australian Customs and Border Protection Service aircraft conducting a routine maritime surveillance patrol in September.

This news is a total 1501 time has been read