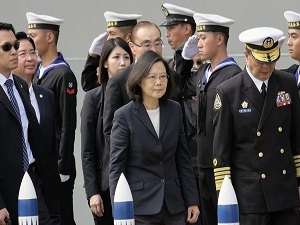 Taiwan’s president on Thursday commissioned a pair of guided-missile frigates that are expected to boost the island’s ability to counter Chinese submarines amid rising military threats from Beijing.

President Tsai Ing-wen attended the ceremony for the Ming Chuan and Feng Chia at a navy base in the southern port of Kaohsiung and reiterated Taiwan's determination to resist all threats, her office said. The ships' commissioning "again sends a clear signal to the world and international society from the people of Taiwan," Tsai said, according to a text of her speech. "And that is, we will not back away one step when it comes to safeguarding the Republic of China Taiwan and protecting our democratic way of life," Tsai said.

The Republic of China is Taiwan’s official name derived from the government established by the Nationalist Party in China which relocated to the island amid civil war in 1949. China claims Taiwan as its own territory, to be conquered by force if necessary, and has recently stepped up its threats by staging military exercises near the island, flying bombers and fighter jets in loops around it and sending its aircraft carrier through the Taiwan Strait.

Chinese President Xi Jinping has said the issue of bringing Taiwan under Beijing's control cannot be put off indefinitely, but Taipei enjoys strong military and political support from Washington, despite their lack of formal diplomatic ties. The Oliver Hazard Perry-class vessels were formerly part of the U.S. Navy, and though built in the 1980s, have been updated with cutting-edge technologies including sonar and undersea warfare combat systems.

Taiwan already operates eight of the ships built under license, using them to patrol the Taiwan Strait from their home port in Penghu, also known as the Pescadores Islands. The two vessels commissioned were sold to Taiwan for $190 million after undergoing thorough overhauls and retrofitting.

Tsai warned that in addition to its traditional military threats, Beijing is also spreading misinformation online intended to destabilize Taiwanese society, the government and local industries. "These are major challenges to national security, and naturally, are also new tasks for the government and armed forces," Tsai said. Taiwanese go to the polls on Dec. 24 to elect hundreds of local government officials and council members in what is seen as a test of confidence in Tsai’s ruling Democratic Progressive Party.

This news is a total 2170 time has been read
Tags: taiwan, china, kaohsiung, tsai ing-wen, warships