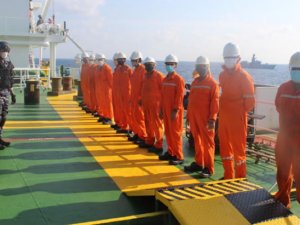 The Indonesian Navy has detained the crew of a tanker that was allegedly involved in the theft of hundreds of thousands of barrels of crude from a Cambodian energy project - a charge which her operator vehemently denies.

According to Indonesian authorities, the Singaporean-owned and -managed tanker Strovolos was detained on July 27 at a position off Sumatra.

She had anchored without prior authorization (a potentially illegal act in Indonesian waters) and she had turned off her AIS system, the Indonesian Navy alleged. The vessel's 19 crewmembers were detained and brought to an Indonesian Navy base in Batam for questioning.

The commander of the Indonesian Navy's First Fleet, Adm. Arsyad Abdullah, said in a statement that the legal process for the tanker's case has been handed over to prosecutors in Batam. "The Indonesian Navy will not hesitate to take action against any type of crimes committed within Indonesia's jurisdictional territory," said Adm. Abdullah.

The master of the Strovolos, a Bangladeshi national, is suspected of anchoring without prior permission in violation of Indonesian law. If convicted, he could face up to a year in prison or a fine of up to $14,000. According to officials in Cambodia, the tanker had been chartered as part of an abortive attempt to produce oil from a field in the Gulf of Thailand.

The private E&P partner for the JV project, Singaporean firm KrisEnergy, began production at the new field in December 2020 with a "phase 1A" small-scale pilot, hoping to achieve 7,500 barrels per day.

The actual output fell far short of that mark, and in June, just six months after starting up, KrisEnergy folded and filed for liquidation. With the tanker's charterer in bankruptcy, a Cambodian government official told AFP, the vessel's day rate went unpaid.

The official accused Strovolos and her operator of departing Cambodian waters with the project's oil on board, allegedly for purposes of theft. Indonesian authorities reported that Strovolos was in laden condition when arrested in late July, and was carrying 298,000 barrels of crude.

The Cambodian government had an equity stake in KrisEnergy's project, as well as a deep political commitment to Cambodia's first-ever domestic oil output, and it filed a Red Notice with Interpol calling for the tanker's arrest. On July 24, Cambodian officials sent a diplomatic note to the Indonesian government, asking for its help in arresting the tanker; an Indonesian patrol vessel carried out the intercept and arrest shortly after.

In a statement Wednesday, vessel operator World Tankers Management insisted that Strovolos had transited to Indonesia purely for the purpose of conducting a crew change.

The firm said the tanker had loaded the cargo in good faith, but when the charterer failed to pay and allowed the charter to lapse, the tanker departed to refuel and headed to Thailand. As crew change is not allowed in Thailand, the Strovolos then headed for Indonesia instead.

The firm protested "wrongful allegations made by the Cambodian government that the vessel and its crew had committed criminal offenses in relation to the vessel’s departure from the Apsara field to refuel."

World Tankers Management added that the crew should not be held criminally responsible for political and commercial circumstances outside of their control. Strovolos' itinerary could not be independently confirmed due a lack of AIS transmission data.

This news is a total 1859 time has been read
Tags: Strovolos , Indonesian , KrisEnergy , World Tankers Management