Tanker danger in the Straits 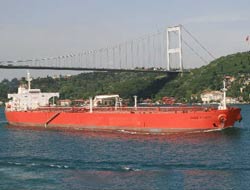 President of Turkish Republic Sezer said "The Turkish Straits that is passed by every year over than 10 tousand tankers and 145 million ton hazardous material, and its people, are under high damages if there would be any accident while transition.

TRANSITION BY THE STRAITS OUGHT TO BE STOPPED

President of Turkish Republic Ahmet Necdet Sezer said "The Turkish Straits that is passed by every year over than 10 tousand tankers and 145 million ton hazardous material, and its people, historical-cultural structure are under high damages if there would be any accident while transition. " he continued: " we have wanted to build edge transation from the land but not from the sea, just this way we want to keep bosphrous from pollution."

ENERGY PROBLEMS CAN BE SOLVED WITH CONSUMPTIONS

Sezer talked at the opening of conferance which is named" West and Eest meets.New borders to energy safety" organisated by Foreign Economik Relations Board (DEIK) and Cambridge Energy Research Associates's association: "With globalism's process' having speed and increase of world energy consumption assocation's growing." Saying" Daily problems at energy consumption can be solved just working together and assocations now" Sezer continued: " For leaving a world that can be lived in to the new generations,we have to develop energy security and on the other hand we should generalize the renewable technologies."

FOR ENERGY SECURITY ALL THE COUNTRIES ARE RESPONSIBLE

Sezer said "Continuing of modern economi and communal life is up to permanent energy resources" and added:"All the countries are responsible about the solution of problems,such as threats to the energy ways.On the other hand; not paying for the substructure that is needed by the resource country countries cause another danger and this is amoung the subjects which should be discussed."

WE WANT TO SEE TURKMENISTA AND KAZAKHSTAN TOO

Making stress at the topic,that Turkey deals to work inland market efficiently,Sezer said" In this context we opened and activated Bakü-Tiflis-Ceyhan Pipeline.And sooner there will be another pipeline (Nabucco Project) that will bring the petrol to european country from the Kazakhstan and Turkmenistan."Sezer added that they want Turkmenistan and Kazakhstan at the Hazar Natural Gas Pipelines as resource country. Remembering the sosial,cultural and historical relations with Turkmenistan and Kazakhstan,he meant they are ready for any assocation with this countries, apart from these he underlined the fact that this assocation will grow exporting and supply this countries' economy.

IRAQ'S RESOURCES SHOULD BE USED FOR IRAQ

Sezer told, one of the most important natural gaz and petrol resource in the world is ?raq.Marketing ?raq petrols to the world markets should be given preference.Sezer continued " But before of that Iraq resources ought to be used for the benefits of Iraq's own people and country"

THE POSSIBILITY OF ACCIDENT BY THE STRAITS

Remembering "every year 145 milyon ton hazardous material and over than 10 thousand tanker passes by the Straitss" Sezer said:"even though adopting all the measures,still there is the possibility of tanker accidents and sinkings. that worrying accident would threat millions of people's life and environment and ecological balances and also this would damage the petrol trade by both Bosphorus and Dardanalles"

Sezer continued and said: " In this sense,with the pipelines that can be built on the land,we want to save Straitss from being oil carrying canal.But while doing this,we should be careful not to pollute shores.With this apprehension our country inspite of the projects that takes place Trakya and threats Aegean Sea,directly opens to Mediterranean Sea Samsun-Ceyhan pipeline should be used. This pipeline is supposed to be active in 2009"