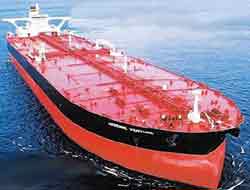 The cost of shipping Middle East crude to Asia, the world's busiest route for supertankers, may halt seven days of declines as refuelling prices traded near a record, reducing the incentive for owners to lease their carriers.

The cost of shipping Middle East crude to Asia, the world's busiest route for supertankers, may halt seven days of declines as refuelling prices traded near a record, reducing the incentive for owners to lease their carriers.

The Singapore price of ship fuel, or bunkers, on Tuesday climbed 0.4 per cent to US$513.50 a metric ton, according to data compiled by Bloomberg. That's 0.8 per cent below the record set in November. Owners can cut consumption and refuelling costs by sailing slower, a move that reduces ship supply.

'Bunkers are going up and owners start digging their heels in,' Per Mansson, a tanker broker at Nor Ocean Stockholm AB, said in an emailed note yesterday. 'We are getting close to the bottom.'

PTT pcl, Thailand's biggest energy company, hired the tanker Cosmerry Lake at a rate of 93 Worldscale points, according to a report yesterday from Paris-based shipbroker Barry Rogliano Salles. That's 16 per cent above the London- based Baltic Exchange's assessment of 79.84 points for a cargo to Japan. Other bookings to Asia were concluded in a range of 75 to 95 Worldscale points, according to Barry Rogliano. Cosmerry Lake is fitted with a double hull to cut the risk of an oil spill. The exchange's assessment also takes into account the hiring of single-hull tankers that are normally cheaper.

Worldscale points are a percentage of a nominal rate, or flat rate, for more than 320,000 specific routes. Flat rates for every voyage, quoted in US dollars a ton, are revised annually by the Worldscale Association in London to reflect changing fuel costs, port tariffs and exchange rates.

At 79.84 Worldscale points, owners of double-hulled very large crude carriers, or VLCCs, can earn about US$40,521 a day on a 39-day round trip from Saudi Arabia to South Korea, based on a formula by RS Platou, an Oslo-based shipbroker, and Bloomberg marine fuel prices.

Freight derivative contracts based on cargoes from the Middle East to Japan on Tuesday advanced 11 per cent to the equivalent of US$53,886 a day for the April-to-June period, according to data from Imarex NOS ASA, the biggest broker of the contracts.

That means derivatives traders are betting the Baltic Exchange's assessment is going to rise. Frontline Ltd, the world's biggest VLCC operator, said on Feb 15 it needs US$31,400 a day to break even on each of its supertankers.

Bookings for VLCCs sailing from the Middle East to Asia account for 47 per cent of global demand for the carriers, according to New York-based McQuilling Brokerage Partners LLP. Shipments to the US and Caribbean, the second-biggest market, account for 14 per cent of demand for supertankers.

This news is a total 798 time has been read