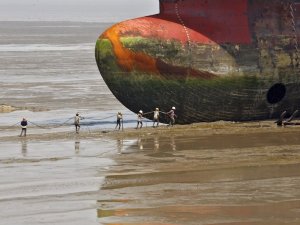 The shipping industry will this year scrap the largest number of oil tankers in over half-a-decade, driven by weak earnings, firm prices for scrap steel and the need to prepare fleets for strict new environmental regulations.

The surge in scrapping underscores how the sector is grappling with one of its worst-ever crises, hit hard after rates for transporting oil plunged to multi-year lows in the wake of excess tanker supply and tepid demand as OPEC production cuts bite.

“The tanker markets are definitely in a trough at the moment, with one of the worst years in a decade in terms of freight rates and returns,” said Ralph Leszczynski, head of research at ship broker Banchero Costa in Singapore.

The tough operating conditions are expected to persist until at least the second-half of 2019, analysts and industry sources said.

Estimates on the number of tanker demolitions vary between the four shipping analysts that Reuters spoke to, with the most conservative standing at a seven-year high in 2018.

About 10.3 million deadweight tonnes (DWT) have been sold for demolition from January to April this year, compared with 11.2 million DWT for the whole of 2017 and 2.5 million for 2016, said Erik Broekhuizen, head of tanker research and consulting at ship broker Poten & Partners Inc.

“OPEC production cuts are hurting the market, and as long as they are in place, the tanker market will remain challenged,” he said, adding that scrapping had picked up for large vessels in particular.

Since early 2017, members of the Organization of the Petroleum Exporting Countries (OPEC), Russia and other non-OPEC crude producers have curbed exports to fight a global oil glut.

The imposition of new U.S. sanctions against Iran looks set to further reduce oil flows later in 2018, although Saudi Arabia and Russia have discussed potentially raising output to fill the subsequent void.

Limited interest in using tankers to store oil, which has historically been a profitable option for shipowners during lulls in shipping volumes, is also curbing overall demand, analysts said.

Scrap steel prices in Shanghai, China – the world’s top consumer and producer of the material – have meanwhile nearly doubled from a year ago due to shutdowns of inefficient steel mills amid a widespread crackdown on industrial emissions.

Firms that have recently sent ships for scrapping include India’s Essar Shipping Ltd (ESPL.NS) and Oslo-listed Frontline Ltd (FRO.OL). The latter last month reported better earnings than analysts had expected, partly due to its increased scrapping.

The ships being scrapped are also getting younger, with the average age falling to 19.5 years in the first quarter of this year, compared with 2017’s average of 22 years, said Rajesh Verma, an analyst with shipping consultancy Drewry.

Most of the vessels are being scrapped in Bangladesh and India, although Pakistan has also returned to the demolition market after an 18-month ban, analysts said.

The uptick in demolition rates has come despite increased opposition from European regulators due to environmental concerns.

Despite the high scrap rate, tanker earnings will continue to be hit as fleet-growth is still too high, analysts said.

With tanker rates still a long way from being profitable, there’s little prospect of a broad industry improvement until the second half of 2019 at the earliest, said Peter Sand, chief shipping analyst at industry lobby group BIMCO.

“Any recovery in rates in the tanker market will be hinged on the extent of scrapping in the coming years … we expect rates to start recovering in the second half of 2019 if scrapping remains strong,” said Verma at Drewry.

This news is a total 1159 time has been read
Tags: Tanker Scrappage To Hit Multi-Year High