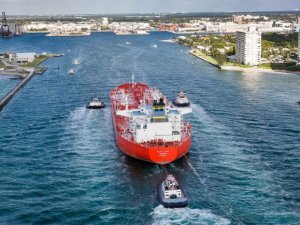 Weak freight rates have prompted a surge of tanker scrapping, in what could prove to be crucial for the long-term revival of the wet market.

In its latest weekly report, shipbroker Gibson pointed out that “traditionally, one of the key drivers for demolition has been weak spot earnings. Just a couple months ago in our weekly commentary we reported higher tanker scrapping in 2017 on the back of deteriorating trading conditions. Further increases have been seen more recently, most notably in the VLCC segment. For the year to date, 15 VLCCs have been reported sold for demolition, with this year’s volume already exceeding the total for 2017. In addition, two former VLCCs (converted into FSOs and used for storage projects) were also sold for permanent removal. Tankers heading for scrapping are getting younger, relative to those demolished last year. This year’s average age is 18.5 years versus 21.5 years for VLCCs demolished in 2017”.

Gibson said that “the latest deals are not surprising, considering the exceptional weakness in the spot market. Since the beginning of the year, spot TCE earnings for modern tonnage have averaged just $8,500/day (market speed) on the benchmark TD3 trade, an unprecedented level for this time of year for nearly two decades. Returns for aging tonnage have been under even greater pressure due to a typical minor rate discount, more waiting time between voyages and higher bunker consumption relative to modern and fuel-efficient tankers. Firmer scrap values have also helped to stimulate demolition: lightweight prices in the sub-continent have climbed above $450/ldt in recent months, their highest level in three years”.

According to Gibson, “the prospects for the spot market remain poor in the short term, suggesting that we are likely to see more tonnage heading for demolition. The phase out of OPEC-led production cuts does not appear to be in sight anytime soon, while increases in long haul crude trade from the US and South America have been insufficient to offset the rapid fleet growth seen over the past two years. Brokers indicate that there are a few more VLCCs being circulated for demolition at present. In addition, a number of vintage VLCCs, which were used extensively for floating storage back in 2017, have struggled to find a suitable employment and could be considered for demolition. Finally, there are over a dozen VLCCs, which are due for their third or fourth special survey later this year. For some of these units, it would be more economical to exit trading instead of investing into an expensive circa $2.5 million survey and drydocking”.

However, “even if more VLCCs are scrapped, it is unlikely to be sufficient to offset 46 VLCCs still scheduled for delivery this year, even if we take slippage into account. We also should not forget that some tankers have been reported for demolition recently or are considered as likely candidates in the very short term, have been largely absent from the trading market anyway (for example, used for storage as discussed above)”, said Gibson.

According to the shipbroker, “further down the line, regulations such as the Ballast Water Treatment (BWT) and the introduction of the global sulphur cap on marine bunkers are widely expected to offer a further boost to demolition. Although the date for the BWT system installation has been extended to September 2024 (if certain conditions are met), only a small portion of the aging fleet will be in position to benefit from it. Many owners decoupled their IOPP certificates from the special survey prior to the BWT deadline extension and so for them the next IOPP renewal and hence the BWT installation is due in 2022. As such, tanker demolition could peak in 2022, offering more substantial support to industry earnings compared to what we are likely to experience this year”, Gibson concluded.

Meanwhile, in the crude tanker market this week, Gibson noted that “a steady but rather slow trawl through the week for VLCCs that remained rangebound over the close of the March programme, and also onto early April positions too. Owners will hope for the bargain hunting pace to pick up next week and lend a degree of momentum to the marketplace, though it will need to be a very sustained phase to haul TCE,s to much above Opex levels. Currently rates to the East operate at around ws 36/37 for modern units with runs to the West still moving in the high teens. Suezmaxes edged lower as longer haul volumes dwindled and shorthaul activity failed to impact. Rates fell off to ws 65 to the East and to ws 25 West accordingly. Aframaxes ‘enjoyed’ a steady flow, but a flow that only maintained rates at their recent lows of 80,000mt by ws 77.5 to Singapore though a slightly more active inter-Far East market may assist a little next week”, the shipbroker concluded.