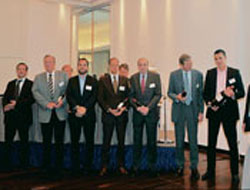 Kornilov is this year?s winner of the Baltic Cup.

Kornilov is this year"s winner of the Baltic Cup.

All praise to Greg Kornilov, from Heidmar UK, who has proved himself the master of the dark art of tanker rate forecasting. Kornilov is this year"s winner of the Baltic Cup, awarded every second year at the Riverlake Shipping and ICAP Shipping Baltic and North Sea Crude Oil seminar.

This year"s event was held in Geneva ? perhaps something to do with the skiing season ? and Kornilov emerged from the one-day seminar with a trophy and bottle of red wine for his efforts.

Back in November 2006, Kornilov correctly forecast the average rates that aframax tankers would earn on the route from the Russian, Baltic Sea port of Primorsk to north west Europe. He not only factored in the 2007 tanker doldrums, but also the remarkable rates turnaround in 2008 that has seen aframax owners experience record average earnings so far this year of W153 on that route. For the record Greg"s forecast submitted this year for the next two years is W133.

While Heidmar was the Baltic Cup winner, it took a Russian to secure the most laughs at the Baltic and North Sea Crude Oil seminar. Capt Surikov, the harbour master from the port of Primorsk gave a thoroughly Russian presentation about the port, its capacities, and future expansion plans.

Just over half of all oil exported from Primorsk is transported by tanker to Rotterdam, with 74 tonnes handled in 2007 alone. Brokers were keen to question Capt Surikov about whether larger tankers would ever call at Primorsk. Much has been made of the fact the port can handle suezmaxes but only a handful have been loaded.

When a diplomatic non-response followed, eventually questions turned to what took up Capt Surikov"s time as he went about organising the port"s daily operations. ?Well, as you know I have a deputy to do that,? he responded, to great guffaws of laughter.

If there are any sore heads in the London offices this week, that"s probably because the City"s shipping fraternity has kicked off Christmas party season with some impressive parties.

On Wednesday night, Gibson held one of the grandest so far, hosting hundreds and hundreds at the Honourable Society of the Middle Temple, near the Royal Courts of Justice. With lawyers probably the main beneficiaries of the dry bulk collapse chaos in the years to come, the venue seemed appropriately apt.

Issues arising from charter party defaults, cargo cancellations, piracy and problems in the paper market will help maritime lawyers pay school fees and large mortgages for 2009 at least. Market chatter was oiled by free flowing wine, with the only hitch for those leaving later in the evening finding their way out of the Inns of Court.