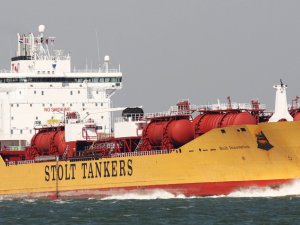 Stolt reported revenue of USD 500.7 million in the third quarter of 2015, compared to USD 545.4 reported a year earlier.

Net profit attributable to shareholders for the first nine months of the fiscal year 2015 was USD 111.3 million, with revenue of USD 1.489 billion, compared with USD 64 million and revenue of USD 1.606 billion, in the same period a year ago.

Stolt Tankers reported an operating profit of USD 37.5 million, up from USD 8.4 million recorded in Q3FY2014, reflecting lower bunker costs, a supportive spot market, and the favourable impact of the stronger U.S. dollar.

Stolthaven Terminals recorded an operating profit of USD 6.4 million, down from USD 16.2 million, mainly reflecting a USD 4.3 million impairment of goodwill and USD 1.1 million in accelerated depreciation of terminal assets in Australasia, along with higher maintenance costs at Stolthaven Houston.

Stolt Tank Containers had an operating profit of USD 15.6 million, down from USD 17.6 million, reflecting the impact of downward price pressure on rates due to increased competition.

“Looking ahead, while we expect the current momentum at Stolt Tankers to continue into the fourth quarter, we remain concerned about the current orderbook for chemical tankers, which stands at just under 30%, and the impact of expected newbuilding deliveries during 2016 and 2017,” Niels G. Stolt-Nielsen, Chief Executive Officer of Stolt-Nielsen Limited, said.

”The relatively healthy product spot market may come under pressure again once the large order book in the product tanker segment starts entering service, pushing swing tonnage into the fringes of our market.”

This news is a total 5421 time has been read
Tags: Financial Results, Stolt Tankers, Stolt-Nielsen Limited.