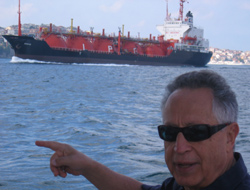 One of the most dramatic stories in a world facing record-high energy prices has been the relentless rise of Azeri, Kazakh and Russian Caspian oil exports from southern Russia since the collapse of the USSR 17 years ago.

TANKERS, PIPELINES AND THE TURKISH STRAITS

One of the most dramatic stories in a world facing record-high energy prices has been the relentless rise of Azeri, Kazakh and Russian Caspian oil exports from southern Russia since the collapse of the USSR 17 years ago. Since 1991 Turkey has watched with growing alarm as the tanker traffic in the Istanbul Bogazi (Bosporus) and Canakkale Bogazi (Dardanelles), known collectively as the Turkish Straits (Turk Bogazlari), has increased, year after year. Merchantmen can traverse the 200-mile passage under good conditions in about 16 hours.

Ankara has been largely powerless to interfere with this rising maritime traffic, bound as it is by the terms of the 1936 Montreux Convention, which, while ensuring Turkish sovereignty over the Turkish Straits, nevertheless provides for unhindered commercial shipping through the channel. According to the terms of the Montreux Convention, Turkey is prohibited from even collecting toll on merchantmen transiting the traits, and commercial vessels are not even required to engage the services of a pilot to navigate the tricky passage.

The last 17 years have also seen a rise in the population of Istanbul, which is bisected by the Bosporus. In 1991 Istanbul"s population was estimated at 10.3 million inhabitants. It now stands at more than 13 million. No other city in the world is divided by a waterway carrying such volatile cargoes on a daily basis, and municipal officials worry about the potentially catastrophic consequences of an accident in the congested shipping passage.

Turkish fears are not groundless; the Turkish Straits are some of the most difficult and complex maritime channels in the world to navigate. The 19-mile-long Bosporus has a convoluted morphological structure that requires ships to change course at least twelve times, including four separate bends that require turns greater than 45 degrees. At Kandilli, a blind 45 degree bend complicates navigation where the channel narrows to less than half a mile. At both Kandilli and Yenikoy, forward and rear lines of sight are blocked during turns. Moreover, two bridges built in 1973 and 1988 spanning the channel increase the navigational threats, and the lags of one of the two bridges are even grounded in the Bosporus. Adding to the north-south international shipping congestion in the Bosporus, approximately 1.5 million people cross the Bosporus daily on intercity ferries and shuttle boats, accounting for about 1,000 east-west crossings of the channel each day.

In the Bosporus"s worst accident, on March 14, 1994, the 66,822-ton Cypriot tanker Nassia, laden with Novorossiysk oil, collided with the Cypriot Ship Broker at the Black Sea entrance to the Bosporus. In the conflagration that followed, 29 of the Nassia"s crew died, the vessel"s port and center tanks containing 19 million gallons of crude ruptured and polluted the Bosporus and both ships were total losses, costing their insurers nearly $13 million The channel was closed to shipping for a week and the accident caused $1 billion in damages (Anadolu Ajansi, March 14-30, 1994). Tankers more than four times as large as the Nassia now regularly ply the Turkish Straits.

The May 2006 opening of the $3.6 billion, 1,092 mile-long BTC pipeline has demonstrably lessened the tanker traffic through the Bosporus. BTC"s current throughput capacity is 700,000 barrels per day (bpd), and next year when it begins flowing at normal capacity, it will transport one million bpd. In 2007 the number of tankers passing through the Bosporus decreased for the first time, with 100 fewer tankers transiting the channel. In January and February of this year 200 fewer tankers made the passage than last year, a decrease of 20 million tons (Deniz Haber Agency, March 13).

The double benefit to Turkey of both increased safety in the straits and additional transit revenues has prompted Ankara to promote additional pipelines to bypass the Turkish Straits, most notably the 340-mile, $1.5 billion Samsun-Ceyhan pipeline, also known as the Trans-Anatolian Pipeline (SCP), first proposed in 2004. A year ago Turkey"s then President Ahmet Necdet Sezer said, "With the pipelines that can be built on land, we want to save the straits from being an oil carrying canal?the Samsun-Ceyhan pipeline should be used. This pipeline is supposed to be active in 2009? (Deniz Haber Agency, June 27, 2007).

Turkey"s interest in SCP is not solely in the transit revenues it would generate. Without the pipeline the Turkish government predicts that by 2018 tanker traffic in the Turkish Straits could exceed 250 million barrels annually, while conversely analysts predict that tanker passages could drop by 50 percent when SCP becomes operational (UPI, June 25).

Furthering Ankara"s plans for Turkey to develop into a regional energy hub, Ceyhan"s facilities are to be expanded with the construction of a $4 billion state-of-the-art oil refinery to process Azeri crude arriving in the Mediterranean port (Deniz Haber Agency, April 27, 2007).

Not everything is developing to Ankara"s liking, however. In Athens on March 15 Russia signed an agreement to construct a pipeline connecting Burgas on Bulgaria"s Black Sea coast with Alexandroupolis on Greece"s Mediterranean Aegean shore. The pipeline would establish a direct route for Russian crude oil to Western clients bypassing the Bosporus, relieving pressure on the congested channel but also depriving Ankara of transit revenues. For Ankara, the ideal solution to shipping congestion in the Turkish Straits is pipelines crossing Turkish territory. Whether the Kremlin will be accommodating remains to be seen.

This news is a total 759 time has been read