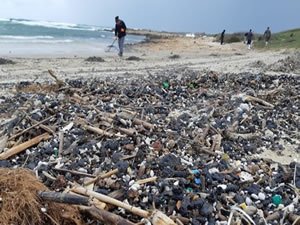 A tar-like petroleum substance is washing up in large quantity on Israel's Mediterranean shoreline, prompting a large-scale cleanup effort involving thousands of troops and volunteers.

The source of the tar is not known, but authorities believe that it originated from a vessel transiting the Eastern Mediterranean. Israeli Environmental Protection Minister Gila Gamliel told Ynet TV that officials have identified nine ships of interest, and she suggested that there was a good chance that the responsible vessel will be located.

The oil has been floating ashore for the past week, and it has affected about 100 miles of coastline so far. On Saturday, patrol aircraft spotted oil slicks in the vicinity of Haifa, all located less than a mile from shore and promising to bring more pollution onto the beach.

Thousands of civilians have pitched in to help clean off the beaches, and members of the Israeli military have been called out to aid in the work. On Sunday, officials asked members of the public to stop coming because there is not enough PPE to safely equip all of the volunteers. Several individuals have already been hospitalized due to the effects of fumes from the pollution, according to the Society for the Protection of Nature in Israel.

"This event will not end in the next few days - we are preparing for long, hard work," said Gila Gamliel, Israel's Environmental Protection Minister, speaking to the Times of Israel. "We are doing everything in order to find those responsible for the destruction, and are preparing for the difficult and long task of rehabilitating the beaches and preventing further injury to animals."Wildlife impacts have been reported, including oiled birds and sea turles. A large fin whale washed up dead along the shoreline in southern Israel on Thursday; the cause of death has not been established and biologists are evaluating samples from the carcass.

This news is a total 5247 time has been read
Tags: Tarballs , petroleum substance is washing , Israeli Shoreline