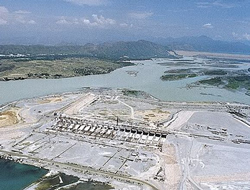 An agreement was signed between Pakistan Water and Power Development Authority (WAPDA) and a joint venture to conduct sediment management study for Tarbela Reservoir while the study will be completed in three months with cost of around $ 3 million.

The study aims at exploring various options to evacuate sediments from the reservoir to tackle the issue of decreasing water storage capacity in the reservoir because of the natural phenomenon of sedimentation. These options include dredging, flushing, blowing etc, said a press release received here on Tuesday.

The study will be completed in one year and three months with a cost of about $3 million. The World Bank is providing funds for the study through its Water Sector Capacity Building and Advisory Services Project (WCAP).

It is worth mentioning here that Tarbela Dam Project, an engineering marvel built in 1974, is considered to be the lifeline for national economy. Tarbela Lake spreads over an area of 259 square kilometers, with maximum elevation of 1550 feet above mean sea level. Average annual water inflows at Tarbela is 64 million acre feet (MAF), which brings along a huge quantum of sediments estimated at 200 million tons per year from a catchment area of more than 169,000 square kilometers.

This news is a total 8586 time has been read