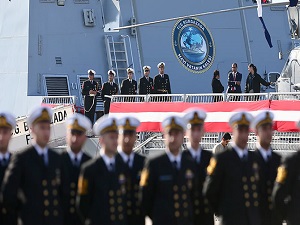 Burgazada was commissioned after entering water in June 2016 and starting sea trials in March this year. The 99-meter corvette is part of the Turkish MILGEM project. Milgem (which translates to national ship) covers the construction of four Ada-class corvettes, four TF-100-class and four TF-2000-class frigates for the Turkish Navy.

Ada-class corvettes are designed to embark ASW/ASUW helicopters and are fitted with Harpoon missiles and a 76 mm gun. They are fitted with the indigenously-developed combat management system GENESİS which is also used on Turkey’s eight G-class frigates.

Construction has also started on the first of the second batch of MILGEM warships, the TF-100-class frigates. STM as main contractor on the MILGEM project is authorized to offer export versions of the designs to international customers.