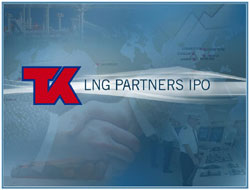 Teekay Corporation agrees with Merrill Lynch to develop a project to convert the S/S Arctic Spirit (the "Vessel") into a floating liquefied natural gas ("LNG") plant.

Teekay Corporation agrees with Merrill Lynch to develop a project to convert the S/S Arctic Spirit (the "Vessel") into a floating liquefied natural gas ("LNG") plant.

Teekay Corporation ("Teekay") Friday announced an agreement with Merrill Lynch Commodities, Inc. to jointly develop a project to convert the S/S Arctic Spirit (the "Vessel") into a floating liquefied natural gas ("LNG") plant to be moored alongside a pier near Kitimat, British Columbia. Teekay LNG Partners L.P. will have an option to participate in the project as well.

The converted Vessel would have the production capacity to liquefy 75-100 million standard cubic feet per day of pipeline quality gas, or, approximately 0.5 million tonnes per annum of LNG.

"The Vessel is one of only two LNG carriers with the self-supporting prismatic type B cargo containment system, which should be ideal for floating LNG," said Mark J. Kremin, Vice President, Gas Services, Teekay. "The potential to produce the world's first floating LNG unit in British Columbia, where our operations are headquartered, is an exciting prospect."

"Reliable Canadian LNG supply should be very attractive for LNG buyers and end users. This development will prove the feasibility of floating liquefaction and will provide an option for monetizing stranded gas resources in other parts of the world," continued Mr. Kremin.

The project is expected to commence LNG operations in 2012, subject to obtaining the necessary regulatory and local approvals.

With a fleet of 180 vessels, offices in 17 countries and 6,600 seagoing and shore-based employees, Teekay provides a comprehensive set of marine services to the world's leading oil and gas companies, helping them seamlessly link their upstream energy production to their downstream processing operations. Teekay's reputation for safety, quality and innovation has earned it a position with its customers as The Marine Midstream Company.

This news is a total 865 time has been read