Teekay builds on its LNG service .. 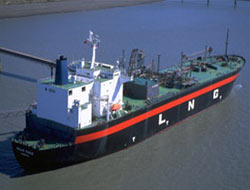 Teekay has purchased two unique liquefied natural gas (LNG) carriers that, in future, may help its customers develop smaller gas fields and open up markets that were previously inaccessible.

Teekay has purchased two unique liquefied natural gas (LNG) carriers that, in future, may help its customers develop smaller gas fields and open up markets that were previously inaccessible.

Teekay acquired two specialized LNG carriers. The Polar Eagle pictured here has been renamed the Polar Spirit. He says the SPB (Self Supporting Prismatic shape IMO Type ?B?) cargo tank is a robust design which has been likened to ?an egg in a carton.? The tanks can withstand severe cargo sloshing, which conventional membrane-style tanks cannot. Teekay believes their most likely use will be as off-take vessels from floating liquefaction vessels, feeder vessels to Floating Re-gasification and Storage Units (FRSUs) or as trading vessels with their own re-gasification units on deck.

The vessels are also suited for delivery of partial cargoes at multiple ports, expanding the range of services Teekay provides its customers. The 88,000-cubic cargo capacity ships, about half the size of conventional LNG carriers, were purpose-built in 1993 to carry gas from Alaska"s Kenai LNG liquefaction plant to utility customers in Japan. They were acquired by Teekay from ConocoPhillips and Marathon Oil Corporation and have been time chartered back to them for the life of the Kenai project, which could end as early as 2009, but probably later.

Crews currently employed on the vessels, renamed Arctic Spirit and Polar Spirit, have transferred over to become Teekay employees, adding to the company"s pool of experienced LNG officers and seafarers and providing additional training platforms. With their valued expertise, Teekay now has the greatest experience in operating LNG vessels in harsh winter climates.

This news is a total 1534 time has been read