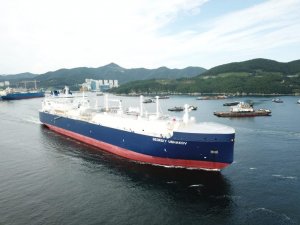 Georgiy Ushakov, as the vessel is named, is the fifth of six LNG carrier newbuilds to be delivered to the joint venture for the Yamal LNG project in Russia.

Georgiy Ushakov was delivered on November 6, and is currently en route to Sabetta, on the Yamal Peninsula, for its first loading ahead of its golden voyage.

The final carrier in the series, Yakov Gakkelm, will be delivered soon, according to Teekay.

Back in 2014, Teekay LNG Partners, part of the Teekay Group, signed contracts with its joint venture partner, China LNG Shipping, for the six LNG carriers. They agreed that the LNG ships would be on charter to Yamal LNG project in Northern Russia, operating on the Arctic route and transporting clean energy from the Arctic to the Asian and Nordic regions.

The vessels are being delivered by South Korean shipbuilder Daewoo Shipbuilding and Marine Engineering (DSME).

Japan’s Mitsui O.S.K. Lines and China COSCO Shipping also have four LNG carriers on order for the Yamal LNG project. The first one, LNG Dubhe, was delivered earlier this month.