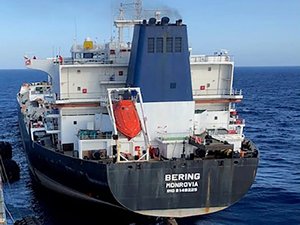 Four tankers whose fuel was seized by the U.S. over the past month were heading to Venezuela and carrying gasoline loaded in Iran, according to Iranian Oil Minister Bijan Namdar Zanganeh.

His comments are the first acknowledgment by Tehran that the vessels were transporting cargo from the Islamic Republic when the U.S. confiscated it. Iran’s President Hassan Rouhani said on Saturday it was a “lie” that the ships were Iranian, though he didn’t comment on what they held.

The seizure was an unprecedented step by Washington, which said the ships contained 1.1 million barrels of petroleum, and could destabilize global oil markets if Iran retaliates.

“The cargoes were loaded from Iran, but neither the ships nor the cargoes belonged to Iran, and the U.S. declared victory for itself in the middle of this,” Zanganeh said on Monday at a briefing in Tehran. “The fuel was Iranian, but it had been sold to Venezuela and its payment had been cleared.”

Iran could disrupt international tankers transiting the Strait of Hormuz, the world’s most critical choke point for oil shipments. The impact on oil prices would probably be slighter, however, than if pandemic-driven lockdowns hadn’t battered demand for energy.

It’s unclear where the ships were at the time of the seizures because they had all turned off their satellite-tracking systems to avoid detection, according to data compiled by Bloomberg. Neither is it clear whether the U.S. still holds the vessels or has released them.

On Aug. 12, Iranian forces forcibly boarded the Liberia-flagged tanker Wila in the Gulf of Oman. The U.S. Department of Justice said that while the ship was “unrelated” to the four heading to Venezuela, the incident was “an apparent attempt to recover the seized petroleum.”

While Iran regularly intercepts ships it alleges have entered its waters or are illegally smuggling fuel, last week’s boarding evoked memories of a spate of attacks on vessels in 2019 that even saw Britain and Iran engage in tit-for-tat seizures.

Two of the four Venezuela-bound ships are registered to the same address in Piraeus, Greece as the Wila, according to a United Nations database. All four are managed by the owner of the Wila or its offshoots, according to maritime intelligence company Lloyd’s List.

Iran has been exporting gasoline to Venezuela in defiance of U.S. sanctions that are intended to choke off both nations’ oil revenue. Venezuela has the world’s largest crude reserves, but in recent years production has plummeted and its refineries have fallen into disrepair because of mismanagement by President Nicolas Maduro’s government and U.S. sanctions.

The Justice Department said the Islamic Revolutionary Guard Corps, which the U.S. designates as a terrorist organization, was behind the shipments.