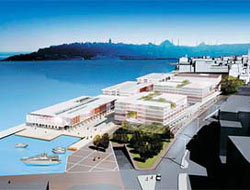 However, the tender was cancelled by the Council of State.

Now a new tender is being planned for this project.

The Privatization Administration Board is preparing a new tender specifications, by taking into consideration the reasons for cancellation of the tender.

"We have prepared a new plan for the region between Karakoy Square and Mimar Sinan University.

We have reduced the number of cruiser docks from three to one," Kaptan said.

According to Kaptan, the pier will be removed from Galata and the coastline will be opened till Mimar Sinan University.

"Thus, the streets of Tophane, from Kilic Ali Pasa to Karakoy Square, will view the sea. This is a big project," he commented.

"On the new plans for Salipazari, where the Galataport project will be realized," Kaptan said.

The other cruiser docks will be constructed in Haydarpasa.

Two docks will be built in Zeytinburnu, and two others in Atakoy. We think of constructing about ten cruiser docks in Istanbul."

This news is a total 1401 time has been read