Terminal to expand its capacity 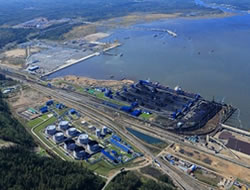 A consortium of investors, made up of the Russian Direct Investment Fund (RDIF), a group of foreign investors and Gazprombank, has reached an agreement on terms of an investment into a liquefied petroleum gas (LPG) and light oil products transshipment ter

This terminal is owned by the Russian petrochemical holding, SIBUR, in the sea port of Ust-Luga. The transaction amount of the investment is over US$700mln.

As part of the transaction, the consortium will gain complete control over the terminal, which is not only the largest in the CIS but also the only LPG transshipment terminal in the Russian North-West. It is also one of the most modern port infrastructure facilities on the Baltic Sea.

The consortium’s investment will allow the terminal to optimise its capital structure and expand its capacity for both LPG and the wide range of light oil products it processes.

Construction of the terminal and the necessary rail and port infrastructure in Ust-Luga was completed by SIBUR in 2013.

Currently the terminal operates at a nominal transshipment capacity of 1.5Mtpa of LPG and 2.5Mtpa of light oil products. Simultaneously, the terminal is undergoing optimisation of operational processes and expansion plans for all products transshipped at the terminal are currently in development.

The terminal has been attributed with national importance and was constructed as part of the federal program for development of port capacities in the Russian North-West.

According to the agreement, SIBUR will have exclusive rights to utilize 100% of the LPG transshipment capacity on the pre-agreed terms.

A joint venture between the investment consortium and SIBUR will entail the operational management of the complex, which will retain all current staff.

This agreement is planned to be signed during St Petersburg International Economic Forum and the transaction will be closed after regulatory approvals are received.

Kirill Dmitriev, CEO of RDIF, said:
“A modern LPG terminal in the Baltic Sea is a crucial step in the future development of Russian infrastructure. This latest development has a significant role to play in reducing domestic dependence on foreign ports as well as responding to the growing European consumer demand for LPG and light oil products.

“This transaction is a key milestone for the Russian infrastructure sector and is in line with RDIF’s strategy to invest in infrastructure assets. This allows the RDIF to gain attractive returns while the company can concentrate on its main business”.

Dmitry Konov, CEO of SIBUR, said:
“Construction of the terminal in the port of Ust-Luga has created an effective transportation route for Russian LPG and light oil products to Northern and North-Western European markets.

“As a result of the deal SIBUR returns its investment in the project while gaining long-term guarantees on capacity utilisation in return.

“This will allow us to then expand our investments in other, more specialized core business projects in the sphere of byproducts of oil and gas monetisation along with the manufacturing of a wide range of petrochemical products for Russian consumers. “

Alexey Matveev, Deputy Chairman of the Board of Gazprombank, said:
“Investment in Russian infrastructure is a core area of Gazprombank’s activity. The LPG and light oil products terminal in Ust-Luga is an attractive investment opportunity due to its fundamental competitive advantages and significant potential for value appreciation in future.”

This news is a total 1539 time has been read