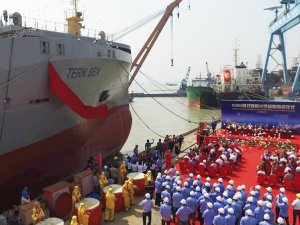 Swedish tanker owner Terntank has taken delivery of the fourth and final chemical tanker with a dual-fuel two-stroke engine which was constructed by China’s Avic Dingheng Shipbuilding.

The M/V Tern Ocean, handed over to the company on March 15, was part of the batch of four tankers with LNG dual-fuel propulsion that Terntank ordered from the shipbuilder in 2013.

Terntank’s representative told World Maritime News that the new 15,000 dwt vessel, which will have a cargo from Indonesia to Rotterdam arriving at the start of May, would be deployed under a time charter contract with the Swedish oil company Preem.

The ship is currently on its way to Indonesia’s port of Padang, where it is scheduled to arrive on March 26, data provided by VesselsValue shows.

Featuring a length of 147 meters and a width of 22 meters, the Tern Ocean was named in September 2016.

In June 2016 the company added the first chemical tanker in the series, the Ternsund, to its fleet. The vessel is intended for distributing refined oil products from NEOT’s refinery in Gothenburg, Sweden.

The second ship from the batch, the Ternfjord, joined Terntank’s fleet in September 2016, while the third tanker under the contract, the Tern Sea, was added to the fleet in November last year.

This news is a total 914 time has been read
Tags: Terntank Adds Fourth Dual-Fuel Chemical Tanker