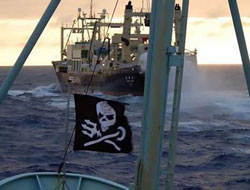 The recent flare-up of terror on high seas, off the coast of Somalia, has become a sharper concern for ship owners.

The recent flare-up of terror on high seas, off the coast of Somalia, has become a sharper concern for ship owners.

Plummeting freight rates and shrinking cargo as a result of the global financial meltdown are not the only issues presently gnawing at shipping companies. The recent flare-up of terror on high seas, off the coast of Somalia, has become a sharper concern for ship owners. Even after the Indian seafarers aboard Stolt Valor, which was hijacked by marine terrorists off the Somalia coast, returned home recently after 64 days of captivity, two more foreign flagged vessels with Indian seafarers on board were hijacked and are still held hostage. Liberian vessel Biscaglia, with 25 Indian seafarers, and Iran Delight, with seven Indians, were hijacked in the same area and in the same manner in the last few weeks.

?So far this year, hijack attempts were made on about 97 ships in the Gulf of Aden. Even as we speak now, some 300 seafarers, dominated by Indians and Filipinos, are held hostage somewhere off Somalia. The ship owners are negotiating on ransom with the pirates, but their safety is still a concern,? Mr Abdulgani Serang, General Secretary of the National Union of Seafarers of India (NUSI), says.

As part of an international initiative, Indian shipping companies have recently agreed to pay additional bonuses for seafarers on board vessels while sailing across the Suez Canal, which takes about 33 hours. Also, naval vessels from different countries, including India, are constantly patrolling the area. But all this gives little solace to seafarers as their vessels prepare to enter the Suez Canal.

The modus operandi of the hijackers is the same. They arrive in groups of about 15 to 20 in speed boats, come alongside unsuspecting vessels and clamber overboard with the help of ropes. Then at gun-point, they force the captain to steer the vessel to certain lairs of the hijackers ? Eyl, which some years was nothing but a tiny fishing port, is today the main lair of Somalia pirates, with swanky restaurants and gleaming cars replacing the earlier tin-roofed dwellings of the local people.

Then, the ransom negotiations begin. Most ship owners have their own professional negotiators, who deal with the pirates. Ship owners are usually asked to drop the money on the hijacked vessels and sometimes paid into foreign accounts or paid in cash through middlemen in neighbouring Kenya.

?The expansion has been agreed because of the number of attacks that had occurred outside the previously agreed zone, like the Sirius Star that was recently hijacked off the coast of Kenya,? an ITF statement says.

The new high risk zone has been projected north and south of the existing area to the Yemeni coast in the north and to the existing war-like operations area in the south, encompassing the Island of Suqutra.

Seafarers on board vessels that sail through the expanded zone will be paid bonus equal to 100 per cent of their basic wage while the vessel is in transit. ?We have communicated the recent decisions at the IBF meeting to the Indian National Shipowners Association (INSA),? Mr Serang said.

Industry observers feel that as a permanent solution, there should be a combined patrolling by the United Nations, instead of the current practice of individual countries deploying their naval ships for the safety of their citizens.