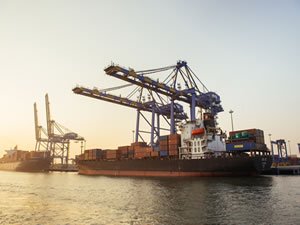 Container traffic at India’s biggest ports fell by 25% between April and August as a direct result of the COVID-19 pandemic, according to data from the Indian Ports’ Association (IPA).

The IPA examined data from India’s 12 biggest ports, which between them account for 61% of the country’s trade and found a decline in TEU handling throughout.

The Jawarharlal Nehru Port Trust (JNPT), for many years the busiest in India, saw its traffic fall by just over 20% between April and August, as did the Port of Kolkata.

Cochin, Chennai and Kamrajar ports fared worse as their volume dropped by over 30% each. The data represents the fifth month in a row that TEU volumes at India’s biggest ports has fallen.

Trade across all cargo sectors fell, except for fertilisers and iron ore, the biggest was seen in the transportation of coal, which fell by 31%.

JNPT was still the busiest port in India between April and August as it handled 1.9 million TEU, although this was a severe drop from the 2.5 million TEU it handled during the same period in 2019.

Such has been JNPT’s decline that there is the possibility it could be overtaken as India’s busiest. In the first quarter of 2019 the Port of Mundra, the second busiest in the country, surpassed it in TEU volume handling 970,000 TEU compared to JNPT 850,000 TEU.

India has suffered significantly since the outbreak of COVID-19, with the added problem of congestion as exports from China resumed earlier in 2020.

In July it was reported that India had begun to clear the congestion, with the JNPT and Port of Chennai claiming their operations were back to normal.

These figures will cast doubt over those claims and cause greater scrutiny over India’s place as a major maritime nation and trade gateway. It also suggests the country has yet to fully recover from the effects of the pandemic.

Furthermore, the plans the Indian government has to challenge the maritime dominance of China with a new mega-port at Vadhaven could be thrown into question.

This news is a total 2212 time has been read