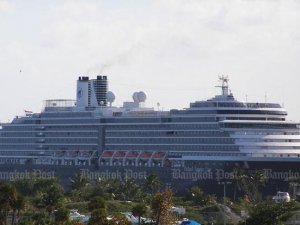 Thailand will not allow a cruise ship from Japan to let passengers disembark at the Laem Chabang port, Public Health Minister Anutin Charnvirakul said on Tuesday.

Mr Anutin posted a short Facebook message saying he has told authorities not to allow the Westerdam ship to dock in Thailand.

The message was posted after the operator of the vessel announced on Monday the ship will let passengers off at the deep-sea port in Chon Buri on Thursday, Kyodo News reported.

The vessel carrying 1,455 passengers -- including four Japanese nationals -- and 802 crew members was scheduled to enter Japan on Saturday. But the Japanese government denied entry to the Westerdam ship after a passenger was suspected of having caught the new coronavirus. It has also been denied debarking in Manila and Guam.

The toll from China's deadly coronavirus outbreak passed 1,000 on Tuesday after President Xi Jinping called for more "decisive" measures to tackle the outbreak in a rare visit to a frontline hospital, according to AFP.

Xi has largely kept out of the public eye since the virus outbreak spread across the country from Hubei province to infect more than 42,000 people.

This news is a total 180 time has been read
Tags: crona virus, travelers to thailand