The area is struggling to survive 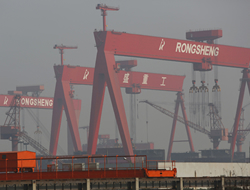 Deserted flats and boarded-up shops in the Yangtze river town of Changqingcun serve as a blunt reminder of the areas reliance on China Rongsheng Heavy Industries Group, the countrys biggest private shipbuilder.

Deserted flats and boarded-up shops in the Yangtze river town of Changqingcun serve as a blunt reminder of the area’s reliance on ChinaRongsheng Heavy Industries Group, the country’s biggest private shipbuilder.

The shipbuilder this week predicted a substantial annual loss, just months after appealing to the government for financial help as it reeled from industry overcapacity and shrinking orders. Rongsheng lost an annual record 572.6 million yuan ($92 million) last year, and lost 1.3 billion yuan in the first half of this year.

While Beijing seems intent to promote a shift away from an investment-heavy model, with companies reliant on government cash injections, some analysts say Rongsheng is too big for China to let fail.

As ship orders and funding have dried up, the firm has delayed deliveries and now faces legal disputes, shipping and legal sources said. The company – whose market value has slumped more than 90 percent to around $1 billion since its Hong Kong listing in late 2010 – is in talks with bankers to restructure its debt.

Local media reported in July that Rongsheng had laid off as many as 8,000 workers as demand slowed. Three years ago, the company had about 20,000 staff and contract employees. This week, the shipbuilder said an unspecified number of workers had been made redundant this year.

This news is a total 1256 time has been read