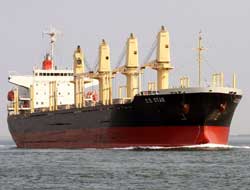 Shipping costs for iron ore, coal and other commodities may rise after a record drop last week, boosted by demand for larger bulk carriers ahead of the Chinese New Year holidays next month.

Shipping costs for iron ore, coal and other commodities may rise after a record drop last week, boosted by demand for larger bulk carriers ahead of the Chinese New Year holidays next month.

The Baltic Dry Index, an overall measure of commodity- shipping costs on different routes and ship sizes, slumped 19 per cent last week to 6,462 points, a level last seen in July 2007, based on data from the London-based Baltic Exchange.

The measure has fallen the past seven weeks. Bulk-shipping rates have slumped 42 per cent from a record in November amid delays in annual price talks between Chinese steelmakers and iron-ore producers and concern that the US and Chinese economies are slowing.

'Rates have been dropping for too long, and hence we saw a bounce in capesize rates on Friday,' T C Chang, head of research at TMT Co, a diversified Taiwanese shipping company, said by phone from Taipei. 'This week, the market may stabilise. Demand is still there, but it's just that the iron ore price negotiations are pending.'

This news is a total 979 time has been read