The Cat gets some cream 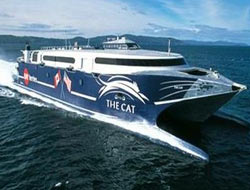 The Government of Nova Scotia says it is "helping to maintain and promote an important transportation link" between Yarmouth and Maine with an "investment" of C$2.5 million dollars over two years in Bay Ferries Limited.

The Government of Nova Scotia says it is "helping to maintain and promote an important transportation link" between Yarmouth and Maine with an "investment" of C$2.5 million dollars over two years in Bay Ferries Limited.

At today's exchange rate that's actually U.S. $2.511 million, which may help explain why the "investment" (which is, in fact, an operating grant) is needed.

Over the past 10 years, there has been a 30 percent decline in U.S. visitation to Canada. As well as the strong Canadian dollar, confusion about passport requirements and high gas prices are among the conditions causing the trend.

Yarmouth continues to be a strategic entry point for visitors to Nova Scotia, especially for those from the United States. Bay Ferries Limited operates the Cat high-speed ferry between Yarmouth and two ports in Maine -- Bar Harbor and Portland.

"The provincial government is making this investment for the economic well-being of southwestern Nova Scotia," said Len Goucher, Minister of Tourism, Culture and Heritage. "Supporting the Bay Ferries Cat service will contribute to the regional and provincial tourism industry."

"This investment in the Yarmouth to Maine ferry will help our company maintain service through a period of challenging marketing conditions for Canada and U.S. travel," said Mark MacDonald, president and CEO of Bay Ferries.

The provincial government and the Atlantic Canada Tourism Partnership also invested C$650,000 earlier this year to continue a long-standing marketing partnership with Bay Ferries. The funding was used for television, newspaper, magazine and online advertising in New York, Boston and along the Eastern seaboard to help increase visitor traffic.

This news is a total 578 time has been read