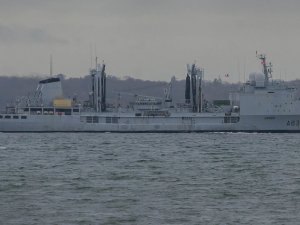 Deployed under the 149th mandate of the Corymbe mission, the Somme is ready for its mission which will start with a patrol in Senegalese waters.

The passage in Portuguese waters has allowed recovering a team of Portuguese marines who, with their French counterparts, will reinforce the protection of the building and contribute to the formation of the shores of the Gulf of Guinea. The period of navigation that separates the old continent from the area of ​​operation was an opportunity to test and test the defence against threats and act on a wide range of action through the use of snipers.

Since 1990, France deploys one to two buildings on Corymbe mission almost permanently in the Gulf of Guinea. The mission has two major objectives: to participate in the protection of French interests in the area as well as to contribute to the reduction of maritime insecurity, by helping, in particular, to strengthen the capacities of the Gulf's coastal waters in the field of maritime safety, in the part of the Yaoundé process. The deployment of French vessels on a Corymbe mission completes the pre-positioned French system in West Africa (Gabon, Ivory Coast, Senegal) and participates in the maritime component of operational cooperation implemented regionally by these presence forces.

This news is a total 341 time has been read
Tags: 149th mandate, the 149th mandate of the Corymbe mission, Portuguese waters, deployment of French vessels on a Corymbe mission completes the pre-positioned French system in West Africa (Gabon, Ivory Coas BALTOPS 2020 to take place ‘exclusively at sea’ due to COVID-19The 49th Baltic Operations (BALTOPS) exercise, the premier maritime-focused exercise in the Baltic Region, will take place in the Baltic Sea from June 7 to 16. Mystery Submarine May Reveal A Major New Capability For IranIt was only a matter of time before this happened. A new vessel, shown in public for the first time this week, is either a very small submarine or a very large Uncrewed Underwater Vehicle (UUV). It appears to be the latter.