The Expanded Panama Canal Just Turned Two: Here Are Some Facts, Figures and Highlights the First Few Years of Operation 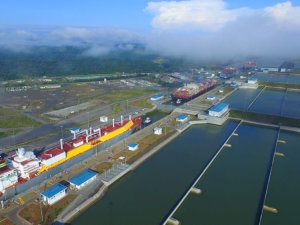 The Panama Canal on Tuesday marked the two-year anniversary of the inauguration of Expanded Panama Canal, the largest enhancement project in the waterway’s 103-year history.

“Two years ago, we pledged to usher in a new era for world commerce,” said Panama Canal Administrator Jorge L. Quijano. “Today, as we reflect upon our countless achievements and ever-expanding impact, we proudly reaffirm this commitment to the global maritime community.”

May also saw the transit of the Panama Canal’s largest cruise ship to date, the Norwegian Bliss, at more than 168,000 gross tons and carrying nearly 5,000 passengers.

The transit of the largest capacity container vessel to-date, the CMA CGM Theodore Roosevelt, with a Total TEU Allowance (TTA) of 14,863.

The Panama Canal Authority, which is responsible for managing the canal, says increased experience with the Neopanamax Locks and continued investment into its operations have allowed the waterway to provide additional capacity, flexibility and efficiency to shippers.

Recent offerings include two additional reservation slots for the Neopanamax Locks, bringing the total number of slots from six (at the time of the inauguration) to eight.

While the container segment makes up the more than half of transits through the Expanded Panama Canal, the impact of the Neopanamax Locks has been seen across all segments.

Perhaps the greatest impact has been seen in LNG, an entirely new segment for the waterway, which has emerged as the waterway’s fastest growing. In just the past two years, the segment has seen a total of 358 LNG transits through the Neopanamax locks.

Some other notable LNG highlights include the transit of three LNG vessels in one day in April 2018 as well as the transit of the “first of many” LNG cargoes from the Dominion Cove Point terminal in Maryland to Japan, taking place that same month.

Moving forward, the Canal’s LNG traffic is expected to grow by 50 percent by the end of FY 2018 compared to FY 2017, increasing from 163 to approximately 244 transits.

The Panama Canal is currently offering one of the eight Neopanamax reservation slots per day to LNG shippers, but the Canal Authority says it has transited two LNG vessels in one day on 14 separate occasions.

“The Expanded Canal is redrawing global trade routes, in the LNG industry and across segments, as shippers have more opportunity to take advantage of the economies of scale provided with the Neopanamax Locks,” said Deputy Administrator Manuel E. Benitez. “Thanks to the careful planning and strategic optimization of our operations, we’re confident the Expanded Canal will facilitate further growth in international trade and have a far-reaching impact in communities around the world.”

This news is a total 457 time has been read
Tags: The Expanded Panama Canal Just Turned Two: Here Are Some Facts, Figures and Highlights the First Few Years of Operation