The expansion may play a key role 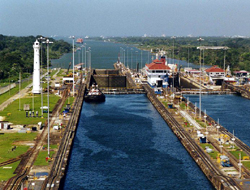 The expansion of the Panama Canal could play a key role in the shipment of South American crude oil to Asia.

The expansion of the Panama Canal could play a key role in the shipment of South American crude oil to Asia.

The expansion of the Panama Canal could play a key role in the shipment of South American crude oil to Asia, especially as Venezuela has announced deals with Japan and China to increase exports to the region, according to an official with the Panama Canal Authority. "Today, through the Panama Canal, we see cargoes of crude oil and products that originate in Venezuela, Colombia and the Caribbean with destinations on the west coast of the Americas," Silvia de Marucci, an official with the authority, told BNamericas.

"These shipments are done in Panamax vessels, which are the maximum size allowed by present locks," she continued, adding that the route was used mostly for regional trade.

The waterway, however, is being expanded and new locks built under a US$5.25 billion project due to be completed in 2014. As a result, vessels with beams of up to 49 million will be able to transit the canal, and the maximum draft will rise to 15 million. "With these dimensions, we expect to see Aframaxes [120,000t] and Suezmaxes [140,000t] transiting with cargo," Marucci said. "In ballast, we could expect to see even VLCCs [230,000t] to be repositioned in other markets when necessary or in a return leg to reload."

Whether or not sending crude through the canal en route to Asia makes economic sense will depend on market conditions including bunker prices, time charter rates, canal tolls and crude oil prices.

The 9,286 nautical mile voyage from Maracaibo in Venezuela to Shanghai, for example, would take 28 days at 14 knots passing through the canal, a saving of 20 days from routes that would use the Suez Canal or Cape of Good Hope.

"All these drivers will determine the route to be selected, but the point for us is that there will be an additional route choice once the third set of locks is ready," Marucci said.

"As trade moves farther south, passing the point of Belén in Brazil, the Panama Canal loses competitiveness versus the Cape of Good Hope in the route to Asia, so we don't foresee any cargoes from Brazil," she added.

Panama is also developing other infrastructure to become more actively involved in the shipment of crude oil and products.

Panamanian company Petroterminales de Panamá is reversing the trans-isthmian pipeline and building storage tanks for different qualities of crude oil on both ends. The pipeline currently runs from the Pacific to the Atlantic to carry Alaskan oil to the Gulf of Mexico and the US east coast, but will start running from the Atlantic to the Pacific in September of this year.

There are also plans by Oxy and Qatar Petroleum to build a refinery on Panama's Pacific coast.

"The project is coming along very slowly, but it is there," Marucci said.

"In addition, we have also identified LNG as potential trade, which nowadays does not use the canal because of vessel dimensions," she said. "LNG vessels are perfect for the canal because a large part of the fleet will fit through the new locks, including their draft, as LNG is rather light.

This news is a total 3018 time has been read