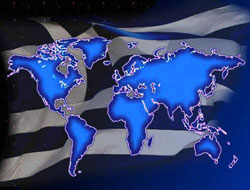 Despite the negative results on the power of the Hellenic flag on the recent annual survey of the Hellenic shipping industry in terms of numbers, commissioned by the Greek Shipping Cooperation Committee (GSCC), based on Lloyd"s Register data, figures from the National Statistics Agency pointed towards a different direction, at least according to data for January of 2009. The national flag managed to post a fourth consecutive monthly rise in January, edging up by seven vessels to a total of 2,089 from 2,082 in December of 2008.

In terms of the tonnage"s total capacity, it now stands at 39,600,486, versus 39,156,211 tons during the previous month. Despite this, the dry bulk fleet kept falling now standing at 625 vessels, against 626 in December. Similarly, a small drop in tonnage capacity was evident, with the dry bulk fleet"s tonnage now standing at 15,057,904 tons, versus 15,078,971 tons in December and 15,112,281 tons in November. The main reason for this development was the scrapping of older tonnage in the dry bulk sector, as a result of the market"s downturn.

The bulk of the increase in the registered fllet came once more from the tanker side, with three more vessels entering the Hellenic Registry, bringing the total tanker fleet at 525 vessels with a capacity of 22,782,654 tons, up from 521 units with a capacity of 22,318,727 tons in December. As for the rest of the fleet (passenger ships and other types), it was also increased by four vessels to reach 939 units in December.

On the dry side, vessel numbers are exactly the same as in 2000, while from a capacity point of view, the growth stands at 26.7%. This is easily translated to bigger bulkers entering the fleet, with capasizes proving to be the most popular type.

This news is a total 704 time has been read