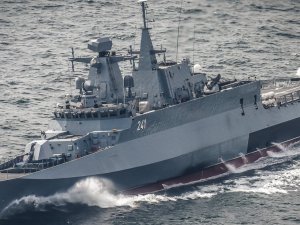 18 years after the keel-laying ceremony, the ORP Ślązak patrol corvette has been finally commissioned. The patrol ship will be part of the Battle Ship Squadrons of the 3rd Ship Flotilla. In total 97 sailors will be serving ORP Ślązak.

18 years after the keel-laying ceremony, the ORP Ślązak patrol corvette has been finally commissioned. The patrol ship will be part of the Battle Ship Squadrons of the 3rd Ship Flotilla. In total 97 sailors will be serving ORP Ślązak. On Thursday, November 28, the ORP Ślązak patrol vessel has received the MW flag in Gdynia War Port.

The ship's incarnation ceremony took place at the quay of swimming pool No. IX at the Gdynia Military Port. Lt. Cdr. The ceremony was attended by parliamentarians, regional authorities, military authorities and representatives of the shipbuilding industry.

ORP Ślązak is a Polish patrol corvette class ship designed according to the MEKO A-100 concept from the German shipyard Blohm und Voss in Hamburg. The unit is part of the Battle Ship Squadron of the 3rd Ship Flotilla. The construction of the unit began in 2001. The ceremony of launching the first launch and giving the name ORP Ślązak took place on July 2, 2015, at Naval Shipyard. Maria Waga was the godmother.

The ship's purpose is to combat surface and aerial targets and asymmetrical threats, as well as patrol and protect approach routes and sea communication lines, escort and protect commercial units. The unit is also adapted to control sea routes as part of multinational forces, combat piracy and maritime terrorism, cooperate with special forces to secure their operations, and participate in humanitarian and ecological actions.

The patrol vessel measures 95 meters long, the Silesian can develop a speed of over 30 knots. There is also a helicopter landing pad on its board. The propulsion of the ship consists of two MTU diesel engines with a power of 4406 HP each and a GE / Avio LM 2500 gas turbine with a capacity of 29920 HP. Thanks to the use of this type of propulsion and the Schottel bow thruster, the ship has excellent manoeuvrability.

It is equipped with a 76 mm OTO MELARA SR cannon, two 30 mm MARLIN-WS cannons, as well as four large-calibre 12.7 mm WKM-Bm machine guns and four PPZR Grom rocket launchers. However, there are many critical voices regarding the equipment of the ship, especially the combat one. It all is connected with the long history of its construction and the concepts changed several times regarding its purpose.

The vessel features an expansive CIC and surveillance suite (SMART-S Mk 2 3D radar, STING-EO Mk 2 fire control radar and Mirador EO fire control/observation suite). In the future, should the Polish MoD be willing to do so, Ślązak may be easily fitted with a VLS solution for anti-aircraft missiles, as the design permits the vessel to accommodate a system as such.

This news is a total 278 time has been read
Tags: Polish Navy , The New Polish Navy vessel ORP Slazak ready for duty