The oceans are becoming a large container terminal 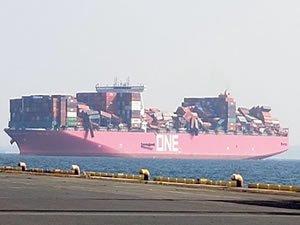 We continually read, see and hear news of hundreds of containers fallen into the sea from large containerships with their huge decks full of crumpled teu and feu.

The instability of the environment in which they navigate is the cause of these mishaps, but the origin of these accidents is in the design of the ships, the operations in the terminals, in the cargo lashing systems, the pressures for the minimum stay in port and the greatest economic savings in ship operations – all of them negatively influencing the safety of the ship and the crew.

The design of the ships and the distribution of weights define their behaviour when sailing in adverse conditions, drafts, stability, efforts, ship’s movement, etc.

Port operations are the most important component in the cause of this type of accident, due to the complexity of the operations, several points can be listed: The minimum stay requirement.

Fast operations, with several cranes working simultaneously. Release of units that will remain onboard but must be unlashed to discharge other boxes.

When complete or almost complete sections (bays) are unloaded without being able to use the ballasts, the strengths that the hull supports are enormous and facilitate its deformation.

The pulls on the containers below those to be unloaded cause the lashing to loosen. Loading the top tiers with several cranes simultaneously working frequently involves more than 160 units per hour and up to 10 deck heights, which is difficult to control from the deck.

Discharges and loads of hundreds / thousands of reefers that must be disconnected / connected and controlled by temperature. Loads of IMO, B / B, OOG etc.

If to all this complex operation we then must add food provisions, other supplies, inspections, sludge discharge, taking on fresh water, fuel and lubricant intakes, crew changes, repairs and workshops. We then begin to realise that the crews are under enormous pressure and may not be able to control how the containers are distributed and stowed by ports of destination and weight, perfectly stowed on their supports and with their correct lashing.

Upon completion of the operations, the ship is asked to leave in one hour, no more.

They are very exceptional cases when a ship takes more docked time. If they detect a wrongly positioned container, rectifying it is usually almost impossible since stevedore appointments have certain rules and schedules, assuming an excessive delay for that potential repositioning operation.

A feasible solution would be the appointment of surveyors, independent of the terminal, and stevedores who would certify to the captain the correct stowage and lashing of the cargo and keep a signed copy of the departure stability calculation.

The lashing of the containers on deck from the heights that cannot be lashed from the gangways is designed to be as fast as possible in both unloading and loading operations, but accident after accident shows that it is not effective for the safety of the crews, the ship nor the marine environment.

Insurance companies, IMO, SOLAS – all must act to avoid falling into the normalisation of this type of accident.