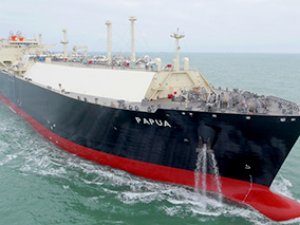 The first custom-built LNG carrier for the Papua New Guinea LNG project (PNG LNG) arrived at the PNG LNG marine facilities on February 22 to begin cool down and loading of its first LNG cargo.

Recently christened as the Papua, the 172,000 cubic metre, 290-metre-long LNG carrier has entered service on a long-term charter with the PNG LNG Project. The Papua is the largest liquefied natural gas carrier ever to be built in China.

”We are already off to an exciting start to 2015 with our first custom-built ship preparing to load its first cargo, which will be shipped to Sinopec,” said Andrew Barry, ExxonMobil PNG managing director.

The Papua is owned by Aquarius LNG Shipping Limited, which is a joint venture with Mitsui O.S.K Lines (MOL), China Shipping Group, and Sinopec. MOL will operate the ship on behalf of the PNG LNG venture and deliver cargoes under the direction of ExxonMobil PNG Limited, the operator of the PNG LNG Project.

In 2011, Exxon Mobil Corporation and MOL selected Hudong-Zhonghua Shipbuilding, a subsidiary of China State Shipbuilding Corporation, to build two LNG carriers in China for the PNG LNG Project. The Papua is the first of the ships to be built, with the other scheduled for completion in 2016.

This news is a total 2724 time has been read
Tags: Papua New Guinea, PNG LNG, The Papua