The Pentagon wants to forge ahead with robot warships, but Congress wants to slow the train 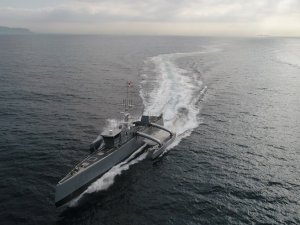 WASHINGTON — Unmanned surface vessels are all the rage in the Office of the Secretary of Defense, and the U.S. Navy has lined up behind the effort. But Congress remains skeptical until it sees the Navy make progress on the basics.

In the latest sign of congressional ambivalence on unmanned surface warships, the House Seapower and Projection Forces Subcommittee called for restricting funding for procurement of any large unmanned surface vessels, or LUSV, until the Navy can certify it has worked out an appropriate hull and mechanical and electrical system, and that it can operate autonomously for 30 consecutive days.

Furthermore, the Navy must demonstrate a reliable operating system and that any systems integrated into the platform — sonars, radars, etc. — are likewise functioning and reliable, according the text of the subcommittee’s markup of the fiscal 2021 National Defense Authorization Act, Congress’s annual defense policy bill, obtained by Defense News.

In short, the language would mean the Navy could not spend procurement dollars on a large unmanned surface vessel until it has a working model, and it may not try to develop those technologies on the fly.

It’s the same kind of subsystem development language that was championed in the Senate Armed Services Committee’s markup of the FY21 NDAA, which “requires the Navy to qualify the main engines and generators for certain unmanned surface vessels prior to vessel procurement,” according to a summary of the markup.

The Defense Department has been championing a major shift away from large surface combatants, based on decisions by Defense Secretary Mark Esper that are in line with his in-house think tank, the Cost Assessment and Program Evaluation office. Instead the Pentagon wants to focus on fielding more unmanned platforms with missile cells that can be more expendable in a fight and act as an external missile magazine for larger manned combatants with more exquisite sensors.

But Congress has repeatedly balked at the idea because the Navy has yet to produce a concept of operations or a coherent public strategy to back up the investment plan. Congress is also wary of appropriating money for platforms that rely on technologies that aren’t fully developed — a practice that has caused countless delays to the littoral combat ship’s mission modules and held up the construction of the new aircraft carrier Ford.

The language in the markup also restricts the Navy from putting weapons on the LUSV until the “Secretary of the Defense certifies to the congressional defense committees that any large unmanned surface vessel that employs offensive weapons will comply with the law of armed conflict.”

This is the second such restriction put on weapons systems being integrated into unmanned surface vessels in as many years.

But in yet another sign that Congress is uncomfortable with the pace of autonomous system development, the sea power subcommittee’s markup directs the Navy to create an office to oversee autonomous systems.

“Not later than February 1, 2022, the Secretary of the Navy shall designate a program executive officer for autonomy who shall be the official within the Department of the Navy with primary responsibility for the development and integration of autonomous technology into weapon systems,” the markup read.

This news is a total 1906 time has been read
Tags: The Pentagon wants to forge ahead with robot warships, but Congress wants to slow the train