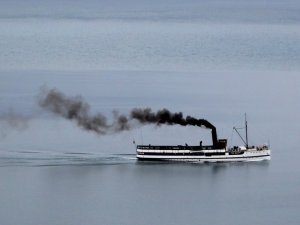 Uncertainty around the sustainability of open-loop scrubbers continues to escalate in the shipping industry ahead of the implementation of the IMO’s sulphur cap in 2020. Varsha Saraogi investigates whether shipowners should be using them.

implementation of the IMO’s sulphur cap in 2020. Varsha Saraogi investigates whether shipowners should be using them.

The shipping industry is in the grips of a metamorphic wave as shipowners grapple with sustainability goals rolled out by the International Maritime Organization (IMO).

In October 2008, the IMO adopted the International Convention for the Prevention of Pollution from Ships (MARPOL) Annex VI that regulates the prevention of air pollution from ships and prohibits deliberate emissions of ozone-depleting substances such as sulphur oxides and nitrous oxides.

From switching to low-sulphur fuels to installing an exhaust gas cleaning system (EGCS) – also known as a scrubber – on board, the entire shipping community is looking at all technologies and procedures to achieve full compliance.

While the new regulation has been welcomed by all, there are various challenges in ensuring full compliance, including the lack of availability of low-sulphur fuels and escalating costs of fuel prices. As freight forwarding firm Flexport’s EMEA head of ocean freight Martin Holst-Mikkelsen puts it: “Achieving IMO 2020 compliance will be a complex and expensive process for shipping companies.”

Why are scrubbers gaining traction?

“So far, open-loop systems have witnessed more uptake in the industry compared to closed units.”

Exhaust scrubbers have become one of the most practical ways of reducing sulphur exhaust for carriers and container lines, and are used to literally ‘scrub’ pollutants out of emissions.

There are also hybrid scrubbers, which switch between open and closed-loop depending on situations such as local rules which may or may not prohibit the discharge of water.

So far, open-loop systems have witnessed more uptake in the industry compared to closed units. According to DNV GL, there are currently 3,756 vessels with scrubbers installed – a huge increase from the 767 in 2018 – and only 65 have closed-loop. This figure is estimated to cross 4,000 by the time the legislation is enforced.

According to Holst-Mikkelsen, shipowners prefer open-looped systems over closed because “they are very easy to install, require less maintenance and don’t require storage for waste materials – as water is directly pumped back into the sea after onboard treatment”.

Is pumping polluted water back into the sea environmentally sound?

“The washwater must meet strict criteria, so that discharge washwater should have a pH of no less than 6.5.”

The industry is facing a fierce debate over whether open-loop scrubbers represent an environmentally sound option.

The investigation claimed that shipowners were doing so despite knowing that scrubbers “have a devastating effect on wildlife in British waters and around the world”.

Quoted in the expose was Transport and Environment campaigner Lucy Gilliam, who described open-loop scrubbers as “cheat devices which allow shipping companies to wash their hands of their environmental responsibilities”.

In response to the Independent, the IMO outlined that it approves the use of open-loop scrubbers, deeming them as an “equivalent” – which is defined as “any fitting, appliance or apparatus to be fitted in a ship or other procedures, alternative fuel oils, or compliance methods used as an alternative”. However, it has strict guidelines for discharge of washwater from exhaust gas cleaning systems.

“The washwater must meet strict criteria, so that discharge washwater should have a pH of no less than 6.5,” a spokesperson from the IMO told Ship Technology Global.

“A Group of Experts on the Scientific Aspects of Marine Environmental Protection (GESAMP) task team has been established to assess the available evidence relating to the environmental impact of discharges of exhaust gas cleaning system effluent – the next session of the sub-committee which will be held in February 2020,” the spokesperson added.

“China has already banned the use of open-loop scrubbers within its emission control areas.”

Despite being permitted by the IMO, environmental campaigners are far from convinced over the use of open-loop scrubbers.

For every tonne of fuel burned, ships using open-loop scrubbers emit approximately 45 tonnes of acidic, contaminated washwater containing carcinogens such as Polycyclic Aromatic Hydrocarbons (PAHs) and heavy metals which can affect ocean chemistry and marine life, according to the International Council on Clean Transportation (ICCT), a non-profit organisation that provides scientific analysis to environmental regulators.

As a result, some jurisdictions and ports are already restricting their use in their waters, necessitating either the use of closed-loop scrubbers or lower sulphur marine fuels.

China, for instance, has already banned the use of open-loop scrubbers within its emission control areas covering inland waters and most of its coastline. Other countries with bans or restrictions are the UAE, Malaysia, India, Belgium, Germany, Lithuania, Latvia, Ireland, Norway and parts of the US.

High costs will keep shipowners on the same path

While the environmental ramifications of open-loop scrubbers are many, their appeal is that they allow shipowners to avoid paying high prices for sulphur-compliant fuel, says Holst-Mikkelsen. He adds that the capital expenditure for the scrubber installation provides returns in the form of fuel cost savings, which can prove to be an incentive for ship operators.

Considering how resorting to an alternative low-sulphur fuel could cost the sector up to as $60bn a year according to Wood MacKenzie, it’s easy to see why shipowners use them.

In addition, according to the Clean Shipping Alliance (CSA) 2020, several port authorities including some in Japan and more than 20 various ports in Europe, the Americas, Asia and Australia indicated they had no intention of banning the use of open-loop scrubbers in their waters.

Similarly, a report released by Japan’s Ministry of Land, Infrastructure, Transport and Tourism (MLIT) concludes that the operation of open-loop scrubbers with high sulphur fuel oil is not only safe, it is also preferable to burning low sulphur fuel alone.

While open-loop scrubbers can be more cost-effective as of now, it might, as a result, reduce ship capacity in the long run, according to Holst-Mikkelsen. He details that temporarily, “capacity will be reduced by 4%-5% as a result of the amount of time vessels will be out of commission while scrubbers are installed.

“In the long term, around 2% of capacity will be permanently reduced because scrubbers occupy additional space on the vessel, and vessels over 20 years old will be soon phased out or scrapped.”

Finally, time will tell whether it is an ideal option or whether vessels will switch to using other means. “The ultimate decision is up to the shipowner,” Holst-Mikkelsen concludes. “Only they can determine the right system to implement in order to achieve full IMO 2020 compliance.”

This news is a total 5031 time has been read
Tags: Debunking: the problem of ships using open-loop scrubbers, scrubbers