The Red One attacked by gunmen 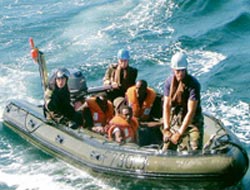 The Red One was attacked by militants in two boats yesterday and Nigerian armed forces returned fire as they protected oil production facilities of Swiss-based operator Addax Petroleum.

Addax has developed several fields in the Adanga area in OML 123 and exports oil through the Fred. Olsen Production-operated Knock Adoon FPSO.

10 other similar attacks in the Niger Delta

There have been 10 other similar attacks in the Niger Delta offshore region already this year.

More attacks were expected after militant groups pulled out of a tentative ceasefire agreement earlier this month.

The Niger Delta has long been plagued by insecurity and violence has spread to offshore areas, forcing oil companies to increase security arrangements and rethink their investment strategies.

Nigerian armed forces are trying to protect offshore facilities such as production platforms and FPSOs but the attacks continue.

Addax Petroleum is one of the largest operators in the offshore Niger Delta and plans to develop more oil and gas fields in the area.

Turkey is considering naval escorts for its vessels

Meanwhile, Turkey is considering naval escorts for its vessels transiting the Gulf of Aden.

The government wants to deploy its navy off the Somalia coast for one year. Several Turkish ships have been hijacked off the coast of Somalia in recent months.

Yardimci is now considering placing armed guards onboard its vessels transiting the Gulf of Aden.

Elsewhere, the Egyptian general cargoship Blue Star has been released by Somalian pirates.

Owner Abdel Rahman Awwa said the ship and its crew of 28 Egyptians were expected to be released ?within hours?, after a ransom payment was made.

Mr Awwa refused to say how much the ransom was, but company sources told the news agency that it was more than $3m.

This news is a total 646 time has been read