The ship Kybele is ready for travel 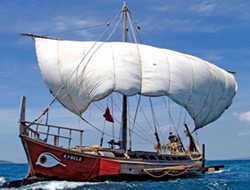 Arkas is the primary sponsor of a project named ?Journey into History via Izmir-Foça-Marseilles?, which intends to relive and document the impact of the Aegean Sea on Europe?s relationships throughout history.

The ship Kybele is ready for travel

Arkas is the primary sponsor of a project named ?Journey into History via Izmir-Foça-Marseilles?, which intends to relive and document the impact of the Aegean Sea on Europe"s relationships throughout history. As part of this project, preparations are being made to send off the ship Kybele in a ceremony to be held in Foça on May 2nd.

Archaeological data was used to construct Kybele, a replica of the ancient ships that used to ply the route from Phokai (Foça) to Marseilles in 600 B.C. This project, called ?Journey into History via Izmir-Foça-Marseilles?, starts at the beginning of June. Powered by oars and sails, the ship Kybele is quite fast, and will travel 1,700 nautical miles with 20 rowers. Kybele will arrive in Marseilles on July 1, which has been chosen as the the beginning of ?2009 ? The Year of Turkey? in France.

A dream come true
Arkas Holding Chairman Lucien Arkas, speaking at the ceremony to send off the boat, said, ?When I was first told about the project, I thought that it was a very bold, unusual and idealistic plan. However, I was convinced that it would succeed because of the confidence the team had. Now that I see how far the project has come, I see that I was right.? In his speech, Mr. Arkas noted that history, the sea and commerce are all intertwined in this project. He emphasized that the year 2010, when Kybele will return to Turkey, is very meaningful to him personally because it will mark the 300th anniversary of his family"s arrival in Izmir from Marseilles. French ambassador Bernard Emie also spoke at the ceremony, where he said that he was very pleased to witness a dream coming true. He added, ?Over 400 economic, cultural and artistic events will be held during The Year of Turkey, and this project will make a significant contribution to making the innovative and modern side of Turkey more visible.?

A first in maritime history
After arriving in Marseilles, the team will travel on French waterways through the cities of Fos, Arles, Avignon, Valance, Vienne, Lyon, Villefrance, Macon, Chalon and Balloy to reach Paris. Scientific and cultural events open to the public will be held in Paris and at ports of call along the route. In this way, the purpose of the project will be communicated by pointing out the things that different countries have in common. After the events for ?2009 ? The Year of Turkey? are held in France, the ship will return via the Danube River to participate in the activities for ?Istanbul ? European Capital of Culture 2010?. This will be the first time in Turkish maritime history that a historical ship will travel to the Black Sea via European waterways.