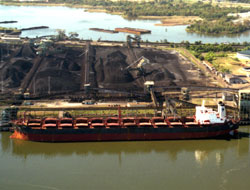 Coal transshipment at the joint-stock company Baltic Coal Terminal reached 1.311 million tons as of July 15, 2009. The first coal handling operation at the terminal took place on March 10, 2009. After the first trial transshipment of 20,000 tons, the terminal has been regularly serving Panamax vessels with tonnage of over 70,000 tons.

The one-millionth ton of coal was loaded at BCT on July 2, 2009 onto the ship SALDANHA that later left for Koper (Slovenia). ?At the moment, the situation on the global coal market has improved slightly, and we believe that the demand for coal will be traditionally increasing until the fall, ahead of the next heating season. Right now though, the Latvian railroad tariffs and the tariff policy pursued by the Government-run company ?Latvijas dzelzcels? are much more important to how well or how badly the terminal fares at the Ventspils Port. The terminal presently works with two companies, and talks are underway on expanding the terminals" clientele. However, the current railroad tariffs do not contribute to increasing cargo turnover and signing contracts with new clients. So far LDz has not expressed much willingness to reach a compromise, despite the ongoing crisis and the need to retain the current cargo flow levels and seek ways to increase them,? said Baltic Coal Terminal Chairman of the Board Ilya Sokolov.

The launch of the joint-stock company Baltic Coal Terminal marked the conclusion of one of the largest investment projects to be implemented in the territory of the Freeport of Ventspils. Over EUR 78 million was invested in the first round of construction of the new terminal and buying the technological equipment and machinery, the entire investment was provided by private investors. Such large-scale investments were made because it is the first closed-end coal terminal to be built in the Baltic region, at the Port of Ventspils, that will use the most up-to-date coal handling technologies. The latest technical solutions were employed in construction of the terminal. The Baltic Coal Terminal has a capacity that allows its clients to export up to 6 million tons of coal a year. After the second round of construction of the terminal is completed, its annual transshipment capacity will increase to 10 million tons.

This news is a total 4236 time has been read