The turnover decreased by 32% 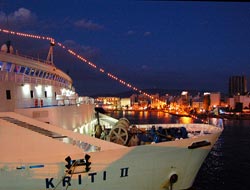 Dockworkers" mobilizations from the beginning of 2008, coupled with the global recession which showed up in Hellas during the last quarter of the year proved enough reasons to hurt the Piraeus Port Authority"s (OLP) earnings. The company"s turnover decreased by 32.28% amounting to 116.04 million euros, against 171.35 million euros in the financial year of 2007. According to a relative statement ?personnel mobilizations throughout the financial year resulted to cargo rerouting from Piraeus Port to other Greek and foreign ports and consequently annual revenues remained at low levels. Specifically, revenue reduction in the Container Terminal was more than 50% against 2007, decisively influencing progress of revenue in this period?. In the remaining port activities, there was a revenue increase from passenger traffic and services to ships, a marginal reduction in the Car Terminal"s revenue and dock dues and a significant reduction in revenue from general cargo handling.

This news is a total 1413 time has been read