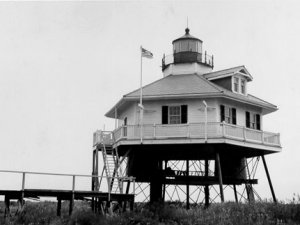 In early September of 1900, a hurricane of massive force struck the Gulf Coast west of Galveston, Texas.

The Great Galveston Hurricane would prove far deadlier than any man-made, environmental or weather-related disaster in U.S. history, with approximately 8,000 killed in Galveston and roughly 2,000 more lost in other parts of the Gulf Coast. This death toll is greater than the combined casualty figure for the 1941 Pearl Harbor attack, Hurricane Katrina, the 9/11 terrorist attacks as well as Hurricane Ike, which struck Galveston in 2008.

In the afternoon of Saturday, September 8th, the storm closed in and floodwaters rushed into the Galveston with wind speeds reaching gale force. By 3:00 p.m., the storm surge had flooded lower portions of the city to a depth of five feet. For many in the city’s East Side there was nowhere to turn and, by 3:30 p.m., reports of death and destruction began to reach the Revenue Cutter Galveston moored in the harbor. The cutter already held 50 refugees and the captain decided to deploy a smallboat to assist the city’s storm victims.

At 4:00 p.m., a volunteer rescue party led by Galveston’s Assistant Engineer Charles Root set-off dragging Galveston’s whaleboat over railroad tracks and launching it into the city’s flooded streets. The high winds rendered oars useless, so the men warped the boat through city streets using a rope system. One man swam through the streets with a line, tied it to a fixed object and the crew hauled it in. Using this arduous process, Galveston’s boat crew rescued numerous victims out of the roiling waters in the city.

At nearby Bolivar Point, the storm surge flooded the low-lying peninsula and waves broke against the base of Bolivar Point Lighthouse. Approximately 125 locals sought refuge from the storm in the lighthouse tower while the water began rising around it. That afternoon, the floodwaters had halted a passenger train approaching the Bolivar Point Ferry Terminal to meet the ferry for Galveston. Of the nearly 100 riders and crew on board the train, only nine braved waist-deep water to seek the safety of Bolivar Light’s tower. Soon after, the rising water surrounded the train, trapped riders and crew in the passenger cars and drowned them all.

In the evening, the storm unleashed Category Four winds on the city. At around 6:15 p.m., the Galveston Weather Bureau anemometer registered over 100 miles per hour (mph) before a wind gust tore it off the building. Bureau officials estimated that by 8:00 p.m., sustained winds blew at 120 mph. By this time, Assistant Engineer Root and his crew returned to the Galveston having filled their whaleboat with over a dozen survivors. Heavy winds were taking an awful toll on the ship, stripping off rigging and blowing away the launch, while wind-driven projectiles shattered windows and skylights.

At the nearby Fort Point Lifesaving Station, Keeper Edward Haines realized his situation was dire and told his crew they should find a way to save themselves. As the floodwaters crept up the station walls, the surfmen believed they could survive in the upper floor of the building, so three of them climbed to the top and passed down ropes for the others. Up to this time, Haines and his wife had remained in the station’s lifeboat, but the waters by now were breaking over them, with the boat tossing on its beam-ends. The keeper lifted Mrs. Haines to the upper story by tying rope around her body and hoisting her to the surfmen above.

After hoisting his wife to safety of the station top, the gallery under Haines collapsed and he was swept into the lifeboat. The storm blew the boat into open water and Haines shouted to the surfmen to protect his wife. Shortly thereafter, he realized two of his men were clinging to the lifeboat and pulled them into the boat.

That night, the storm’s wind and seas began to reach their climax. At 7:30 p.m., Weather Bureau officials recorded an instantaneous four-foot rise in water level while the wind speed reached 150 mph with gusts up to 200. The wind sent men sailing through the air and toppled horses to the ground while the flooding reached its peak at over 15 feet above sea level. The storm surge raised cutter Galveston over its dock pilings, but the piling tops failed to puncture the cutter’s hull plates.

By 8:00 p.m., Assistant Engineer Root was ready to return to the dark flooded streets. He called for volunteers and the same men stepped forward that had served in the first mission. The hurricane still made use of oars impossible, so the crew waded and swam as water depth allowed, warping the boat from pillar to post. Meanwhile, buildings toppled over and the wind filled the air with shrapnel-like slate roof tiles. Root’s men managed to rescue 21 victims, housed them in a structurally sound building and found food for them in an abandoned store. The cuttermen then moored the boat in the lee of a building and sheltered from the flying debris.

In Galveston Bay, lighthouses marked the waters for shipping. Located about seven miles north of Galveston, the Halfmoon Shoal Lighthouse sat over a shallow area in the middle of Galveston Bay. Unmoored by storm-driven ships in Galveston Harbor, the steamer Kendal Castle broke loose from its moorings and began drifting around the Bay. The ship mowed down the Halfmoon Shoal Light, obliterating the screw-pile lighthouse and Keeper Charles Bowen, whose body was never found. As one witness recounted, “we passed within a few hundred yards of where the Halfmoon Lighthouse once stood, but could see no evidence of the lighthouse, it being completely washed away.” If this were not bad enough, the hurricane wiped out three generations of Bowen’s family with his father, wife and daughter all perishing on shore.

Redfish Bar Cut Lighthouse managed to survive the storm, but just barely. Newly commissioned in March, the lighthouse marked a channel through a shallow bar bisecting Galveston Bay. It must have seemed surreal to the keeper when a darkened vessel barreled down on the lighthouse, pushed by Category Four winds. Just as it seemed the ghost ship would crush the beacon, the vessel veered slightly and passed silently a few feet from the lighthouse.

At Fort Point Lighthouse, Keeper Charles Anderson watched the storm surge carry off equipment on the screw-pile lighthouse’s lower deck, including a lifeboat and storage tanks for fresh water and kerosene fuel. The wind grew so intense that it peeled off the lighthouse’s heavy slate roof tiles. Some of the stone tiles shattered the lantern room glass and the winds blew out the light. With Fort Point Lighthouse’s lowest level flooded, the lamplight extinguished, no means of escape, and Keeper Anderson suffering from serious facial wounds, he and his faithful wife made their way to the parlor and to meet their fate.

Hurricanes had blown Galveston Lightship LV-28 off station many times before, but none compared to the 1900 Hurricane. The wooden lightship relied on sails for motive power and was at the mercy of the storm. The hurricane tore the vessel from its moorings and parted its anchor chain. The lightship’s windlass and whaleboat were ripped away and the winds collapsed one of the ship’s two masts. The storm drove the vessel several miles up Galveston Bay before the crew dropped the spare anchor, which held fast. Fortunately, no crewmembers were lost.

By 11:00 p.m., the wind began to moderate allowing Root and his men to return safe, but exhausted, to Cutter Galveston by 12:30 a.m. on Sunday. At about 1:00 a.m., Fort Point Station keeper Edward Haines’s surfboat found bottom and the winds died down to only 20 miles per hour. The cloud cover cleared and the moon illuminated the surroundings for Haines and his two surfmen. They had washed ashore a mile-and-a-half beyond Galveston Bay’s normal shoreline about nine miles by water from the station.

At Bolivar Light, Keeper Harry Claiborne did his best to care for his flock. The hundreds of weary men, women and children rode out the stormy night seated on the spiraling steps leading up to the lantern room. The next morning, the survivors left the safety of the tower to find a scene resembling a massacre. As the floodwater subsided, it deposited the corpses of those who tried and failed to gain the safety of the lighthouse. Meanwhile, Keeper Claiborne’s storm victims had consumed all the provisions stockpiled in the tower and, when he returned to the keeper’s quarters, he found the storm surge had wiped out his worldly possessions.

At Fort Point Light, Keeper Anderson and his wife survived what seemed certain death to see another day. At daybreak, they climbed the stairs to the lighthouse gallery and emerged arm-in-arm to witness the carnage left in the wake of the storm. The receding floodwaters carried away dozens of human and animal carcasses in a silently watery funeral procession from Galveston Bay to the Gulf of Mexico.

Meanwhile, Life-Saving Service Keeper Haines and his two surfmen began searching the beach for survivors and found three more of his surfmen who were blown across Galveston Bay on flotsam. The three men recounted how the lifesaving station collapsed just after Haines’ lifeboat was swept away, throwing the surfmen and Haines’s wife into the roiling seas. Later, Haines located temporary graves containing Mrs. Haines and the missing surfman. Haines and the crew rowed out to the graves with a casket and retrieved her body for re-burial. It is not known whether the surfman’s remains were ever exhumed.

For the next two weeks, Keeper Haines and his crew worked for the Galveston Relief Committee locating hundreds of corpses. In the rush to clear away the dead, most of the bodies were never identified and either buried at sea, buried in hastily-dug graves, or just burned where they lay. Meanwhile, Cutter Galveston’s crew towed countless human and animal remains out to open water. The tide returned many of them to the harbor, so the crew had to tow them to the nearby mud flats and burn them. Galveston’s burial detail burned so many corpses that it finally ran out of fuel oil to set the bodies on fire.

In the Great Galveston Hurricane of 1900, members of the Coast Guard’s predecessor services performed heroically. Keeper Edward Haines and the Galveston Life-Saving Station crew struggled mightily against the forces of nature at Fort Point. The men of the Lighthouse Service and Revenue Cutter Service demonstrated the same devotion to duty by manning the lights and saving hundreds of lives. The Great Galveston Hurricane would be the first of countless hurricane response efforts performed by the Coast Guard and its ancestor agencies.

This news is a total 1344 time has been read
Tags: The USCG's First Superstorm: The Great Galveston Hurricane