The Winners of the IMRF Awards Announced 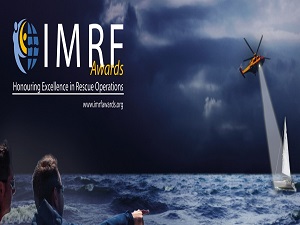 The winners of the International Maritime Rescue Federation (IMRF) Awards 2018 have been announced at a formal dinner and award ceremony attended by shortlisted finalists from around the world.

Exceptionally, there were two winners of The IMRF Vladimir Maksimov Award for Lifetime Achievement in the Maritime SAR Sector, with both finalists being presented with awards recognising their remarkable contributions to maritime safety over many, many years. The judges agreed that both John Kooijman who founded the Curacao Sea Rescue Organisation and Captain Nick Guerchev, Chairman and founder of BULSAR, the Bulgarian national volunteer maritime safety society had both made outstanding contributions to maritime safety.

The winner of the IMRF 2018 People's Choice Award was the Canadian Coast Guard Volunteer Rescue Specialists. Anyone could participate in deciding the winner of this category by visiting the IMRF facebook page and "liking" the finalist they thought most deserving. The finalist with the most "likes" and "shares" at 1600 GMT on 8 November, was declared the winner. More than 11,600 "likes" and "shares" were submitted in total.

The winners of the IMRF Awards 2018 were announced at the IMRF Awards ceremony and dinner on November 8 which was hosted by the Norwegian Society for Sea Rescue (RS) at their training centre, RS Noatun near Horten in Norway.

RS also presented two Local Hero Awards 2018 to two exceptional SAR teams from Norway.  Coxwain Espen Johan Hole and crew members Kristian Lundemo and Magnus Hafslund from RS in Norway were given a Local Hero Award 2018 for their part in a high-profile rescue saving three people.  And a Local Hero Award 2018 was presented to Frode Rostad and Stein Erik Aannerud from RS's Voluntary Search and Rescue Unit at Lake Mjøsa, recognising their tireless volunteering saving lives at sea, over the last 20 years.

The IMRF Awards were created three years ago to recognize and reward the selfless efforts of search and rescue operators around the world, who make many sacrifices to saves lives at sea.

The winners of the IMRF Awards 2018 in more detail:

Captain Siddarth Sharma won the individual award for his actions to save two French fishermen who had been drifting for three days on a sinking fishing boat. He was the master of ITB Astal-Lorida, employed by Trinitas Ship Management and based in India and he says that he simply did what every seafarer should do – to save anyone in distress at sea.

The rescue took place on January 11, 2018 about midday. Sharma was on the bridge and spotted the boat about 2.5 kilometers away. He immediately decided to take action - calling on all of the crew to help. The fishermen had been drifting for three days in very rough weather, strong winds and heavy rain. Their food and water had been washed away, the boat's engine had failed and they'd lost the anchor in the severe weather conditions. It took three arduous attempts over three hours in lashing winds and strong swells to bring the weak and starving fishermen onboard Siddarth's ship. They used the pilot ladder on the port side along with lifejackets, lifebuoys and fired the line throwing apparatus three times to try and reach them until they were eventually successful.

The rescued fishermen were handed over to the French navy at Mayotte, which was a diversion from the ship's planned passage and had to be agreed with the ship's owners and company first. Sharma says that; "It is every seafarer's and Master's solemn duty to save souls in distress at sea. I just did what any seafarer should do. Yes, it was an instant decision, but not without assessing the risks involved. I just did my duty."

The first was on October 29, 2017 when they helped the guard vessel Drifa. The ship's engine had failed and the windows on the bridge had been lost. There were four people onboard the vessel as it drifted in appalling weather, in force eight north westerly winds and waves six to ten meters high. The crew of the KNRM lifeboat guided a coastguard vessel to the stricken Drifa, staying with the ship and seafarers until it was safe.

The second rescue took place on March 1, when a fishing vessel the ZK 80 Linquendaal ran aground between the islands of Schiermonnikoog and Ameland in the Waddenzee.  The wind was 8 BFT from the east and the temperature was -8 degrees centigrade, with a wind chill factor of -22 degrees.

Very few lifeboats (they are mainly waterjet driven vessels) were on duty in the area because of the exceptionally heavy ice conditions. The Frans Hoogewind lifeboat was the only vessel able to reach the grounded fishing boat, and in the course of the rescue, the lifeboat's own air intake channels became blocked with ice, and one of the VHF antenna broke because of heavy ice on the mast.

Nevertheless, the crew of the Frans Hoogewind were able to rescue three crew members from the grounded fishing vessel, one of whom already had frostbite.

On both occasions, the lifeboat crew demonstrated excellent seamanship, enormous courage and an exceptional knowledge of the sea.

The winner of the innovation and technology category is the NSRI's Pink Rescue Buoy.  It is designed to be used by bystanders to provide an emergency flotation device to someone in danger of drowning, before the emergency services or lifeguard arrives.

The majority of fatal and non-fatal drownings on South African beaches are as a result of rip currents, and they are most likely to happen when the lifeguard is not on duty. As a result, the first rescue service on the scene is likely to be the sea rescue and too often they find that there's more one person in trouble in the water, because an untrained bystander has attempted a rescue.

The NSRI Pink Rescue Buoy is high visibility bright pink, easy to spot in the water and comes with a harness, should the rescuer decide to enter the water, providing both the rescuer and victim with a greater chance of survival. It hangs from a bracket on a specially designed sign which displays the local NSRI emergency number or the closest emergency services together with a location number, so the rescue services know exactly where to respond to. Graphics show the bystander how to throw the buoy to the victim in the water.

In just nine months since the start of the project, NSRI has installed 249 Pink rescue Buoys around the coast of South Africa, with the aim of positioning one in every high-risk water area. The first 150 were placed around the East Coast of South Africa targeting the rip currents on the famous 'Garden Route' where approximately 80 percent of the drownings occur, and at the time of the award submission, the Pink Rescue Buoys had already saved 11 lives, four of which were children.

Guerchev was recognized for his lifelong contribution to national safety at sea.

He joined the maritime section of the governmental voluntary defense organization aged just 14. He joined the Navy, completing a post graduate qualification in marine radar and radio communications systems. He was released from the Navy for political reasons, but in 1996 following political changes, was promoted to lieutenant captain of the reserve, for his modernization of naval communication systems and social support. In intervening years, he was the navigating officer of a SAR and salvage vessel; becoming master on merchant vessels, the technical fleet and ocean fishing vessels.

In 1994, he founded BULSAR, the Bulgarian national volunteers maritime safety society and is currently its Chairman. With extensive experience and knowledge of complex marine wreck removal work, submerged technical and divers' emergency operations, he has been personally involved in more than 25 major marine disasters along the Bulgarian sea coast and the Danube. Many of the rescues have been extremely complicated and difficult and its estimated that he has directly and indirectly contributed to the saving over 250 human lives in different accidents and calamities at sea.

He has initiated and organized international drills, contributed towards the purchase and installation of the first two space communication terminals in the Inmarsat system for the Bulgarian Navy, and he initiated and organized NAVTEX in the Black sea countries. Guerchev has helped shape modern legislation for SAR, salvage, and wreck removal and has contributed to numerous publications and papers on maritime safety and safety culture, SAR, salvage and wreck removal.

Kooijman was recognized for his work as a lifelong SAR volunteer and founder of the Curacao Sea Rescue Organization (CITRO) in the Caribbean, more than 40 years ago.

The award recognized the many challenges faced by the young organization. In its early years CITRO relied on yacht and small plane owners to help with search and rescue missions, but it took too long to respond to any emergency call, the yachts were not always sea worthy and not all the yacht owners had the necessary know-how to handle a successful rescue operation.

Over several decades Kooijman has worked hard to share his knowledge, establishing close working relationships with the Royal Netherlands Sea Rescue Organisation (KNRM), which is still part of the CITRO advisory board.

It wasn't until 2001 that CITRO could purchase its first rescue boat, but today CITRO is a professional, growing organization with a solid team of more than 40 dedicated volunteers who train locally and in Scotland, in partnership with the KNRM. There's a fundraising support team, a marketing and PR team and technical team. CITRO has two professional sea rescue vessels, two seadoos, a boathouse, a 24/7 response service, and a signed MOU agreement with the coastguard.

Kooijman was also founder and editor of the Antillean Navigator, a newspaper covering maritime and air news.  He was instrumental to the Caribbean Initiative "CSAR" which works to enhance the safety of life in the waters of the Caribbean by strengthening and establishing volunteer search and rescue units, bringing together the six major islands in the Netherlands Antilles: Aruba, Bonaire, Curacao, Saba, Sint Martin, and Saint Eustatius.