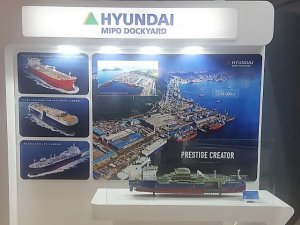 Athens-based ship manager Thenamaris has declared an option for the fourth in a series of 38,000 cbm LPG carriers at the Korean shipyard Hyundai Mipo Dockyard.

Data from the company’s website shows that all four ships are slated for delivery in 2021, contrary to the reports from Clarksons Plateau which said that the delivery was set in 2022.

Out of these, the two Aframaxes and one large LNG carrier are scheduled for delivery this year.

The company has 87 ships in its live fleet, according to VesselsValue, those being 59 tankers, 18 bulkers, 3 containerships, and 7 gas carriers.

This news is a total 773 time has been read
Tags: Hyundai Mipo Dockyard, Thenamaris.