There is a gain of 82 million dwt 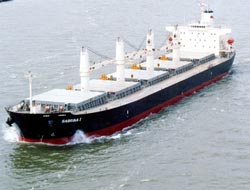 The world merchant fleet increased astronomically between 2007 and 2008, according to the review of maritime transport by the United Nation Conference on Trade and Development (UNCTAD).

The world merchant fleet increased astronomically between 2007 and 2008, according to the review of maritime transport by the United Nation Conference on Trade and Development (UNCTAD).

The world merchant fleet increased astronomically between 2007 and 2008, according to the review of maritime transport by the United Nation Conference on Trade and Development (UNCTAD). According to the United Nations trade organ, the world merchant fleet expanded by 7.2 per cent in 2007 to 1.12 billion deadweight tonnes (dwt) at the beginning of 2008. By that percentage increase, the organisation said there was a gain of 82 million dwt over the corresponding period of previous year.

The organisation attributed the increase to the historical high demand for shipping capacity that was responded to by the world shipping industry by ordering new tonnage, especially in the dry bulk sector.

The UNCTAD review of Maritime transport, copy of which was mailed to The Guardian few days ago, said vessel orders were at their highest level ever, reaching 10,053 ships with a total tonnage of 495 million dwt, including 222 million dwt of dry bulk carriers.

According to the organisation, the tonnage of dry bulk ships on order at the end of 2007 was 72 times higher than it was in 2002. It said since mid 2007, dry bulk orders outstrip those of any other vessel type.

The influx of new tonnage into the world fleet, said the organisation, over the recent years has contributed to the decrease in the average age of the world fleet to 11.8 years.

The tonnage of oil tankers increases by 6.5 per cent while that of dry bulk carriers increased by 6.4 per cent. These two major type of ships together represent 71.5 per cent of the world total tonnage, a slight decrease from 72.0 per cent in January 2007. The fleet of general cargo ships increased by 4.5 per cent in 2007. This growth rate was below the world total growth rate. This category's share of the total world fleet has further declined to 9.4 per cent.

The UNCTAD's review of maritime transport said the fleet of containerships increased by 16.3 million dwt, or 12.7 per cent, and now represents 12.9 per cent of the total world fleet. This high growth rate, according to the UNCTAD review, reflected the increasing share of trade in manufactured goods, which was further enhanced by its continued containerisation.

In 2008, only 1.1 per cent of the dry bulk fleet were combined ore/bulk/oil carriers, a further decreased from 1.5 per cent share of one year earlier. In spite of the high fluctuations in vessel charter rates, both for oil tankers and for dry bulk carriers, the building cost differential between purely dry bulk carriers and carriers still deterred investment in the more versatile combined carriers.

Among other types of ships, in 2007 there was a strong growth of liquefied natural gas carriers, which rose by 11.5 per cent reflecting the growing use of LGN in global energy supply.

The world fleet of fully cellular containerships continued to expand substantially in 2007. By the beginning of 2008, there were 2.276 ships with a total capacity of 10.76 million TEUS.

This represented an increase of 9.5 per cent in the number of ships and 14 per cent in TEU capacity over the previous year.

In 2007, the largest new fully cellular containerships were five 12.508 TEU vessels built in Denmark for the Danish Company Maersk, and the smallest new deliveries were 136 TEU ship built in Viet Nam for the Danish company Erria and two Indonesian built and operate 241 TEU ships.

The average age of vessel reduced to 11.8 years

Further maritime transport analysis by UNCTAD recalled that developed countries have the youngest vessels as their vessels on the average age of 10 years old in 2008 followed by developing countries which vessels are on the age average of 13 years. The transit economies have vessels that are about 16 years old.

The continue increase in the world fleet has since caused a dip in freight rate globally according to the review of maritime transport.

Strong demand for shipping services helped push to unprecedented high the cost of moving dry bulk commodities internationally, as echoed by the Baltics Dry Index (BDI) through the first quarter of 2008. The BDI is a composite of shipping prices for various dry bulk products such as iron ore, grain, coal, banxide/alumina and phosphate and is a useful indicator of price movement.

More recently, the BDI has declined more than 11 fold from 11,793 points in May 2008 to 891 as at early November. This shows that the unfolding financial crisis has spread to international trade with negative implication for developing countries, especially those depending on commodities.

The immediate effect of declining freight rates for the developing worlds is mixed. Lower freight costs lead to lower prices for delivered traded goods. Both exporters and importers of food and other commodities thus benefit from lower freight costs, and inflationary pressures are eased. For most commodities shipped in bulk, freight rate account for a higher portion of the final value of the goods. Shipments with lower value of weight ratios are more sensitive to variations in transport costs. Because developing countries trade is dominated by trade in commodities or Low-value manufactured goods such as steel products), a drop in shipping rates benefits their trade under normal circumstances.

However, a rapidly falling BDI is also accompanied by reduced demand for shipping services, increasing the effects of the financial crisis and global demand for goods. This will negatively affect many developing economies.

Global merchandise trade had grown by 5.5 per cent in 2007, almost two per cent points higher than the growth of the world's gross domestic products (GDP) for the year. Dynamic emerging developing and transition economies drove the increase in international seaborne trade up by 4.8 per cent in 2007. In terdem with economic and trade expansion, demand for shipping services increase to reach 32,932 billion tonne mile, a 4.7 per cent jump. World container throughput grew by an estimated 11.7 per cent to reach 485 million TEUS in 2007, said UNCTAD in the 2007 review of maritime transport.