Third bridge over Bosphorus to open first half of 2016: Minister 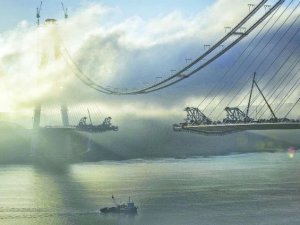 Transport Minister Binali Yıldırım has said the third bridge over Bosphorus will likely open in the first half of 2016, either in April or May.

He noted that there would be four motorway lanes on the Northern Marmara Motorway and one railway line in each direction over the bridge during an Q&A session with a number of deputies at parliament late Dec. 22.

“All works on the bridge will be completed in the first half of the next year, probably in April or May 2016. After this bridge and its connecting roads are opened for service, Istanbul’s heavy vehicular traffic will be canalized to this route, thus relieving the intra-city traffic. The first and second bridges over Bosphorus will mainly for light vehicles,” he said.

The groundbreaking ceremony for Istanbul’s $3-billion third bridge, named the Yavuz Sultan Selim Bridge for the Ottoman sultan known as “Selim the Grim” who was famous for his conquests in the Eastern world, over the Bosphorus was held in May 2013.

He also added that the number of cruise tourists has increased to 1.8 million in a total of 12 ports this year.

Yıldırım said the number of motor vehicles increased from 8.5 million to 20 million in the last 12-year period.

This news is a total 4789 time has been read