This lawsuit dismissed this week 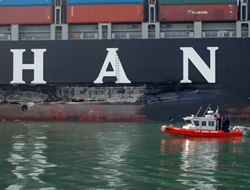 A U.S. Coast Guard boat inspects the 100-foot gash in the hull of the Cosco Busan, which caused the release of an estimated 53,000 gallons of oil.
John Cota, the former San Francisco pilot who infamously crashed the M/V Cosco Busan into the San Francisco-Oakland Bay Bridge on a typical foggy morning in November 2007 causing the discharge of some 53,000 gallons of oil, will not be getting his license back.
The San Francisco Chronicle reports that U.S. District Judge Jeffrey White on Monday dismissed a lawsuit from Cota and his team lawyers seeking to renew his Coast Guard-issued merchant mariner license.
John Cota surrendered his license following the accident and in July 2009 was sentenced to 10 months in prison after pleading guilty to two misdemeanor charges of illegally discharging oil into the bay and killing thousand of birds.
In 2010, Cota asked the Coast Guard to have his license reinstated, but was denied due to factors that went beyond his criminal record from incident. Since then, Cota has been working through the Coast Guard appeals process and considering all options in hopes of one day sailing commercially again. The lawsuit dismissed this week was filed in February.
The NTSB final report into the 2007 allision found that John Cota had “degraded cognitive performance from his use of impairing prescription medications”, among other contributing causes, but also mentioned a the U.S. Coast Guard’s failure to “provide adequate medical oversight of the pilot in view of the medical and medication information that the pilot had reported to the Coast Guard” as a contributing factor. Last year it was rumored that Cota had been working shoreside for a local tug company in the bay area.
www.turkishmaritime.com.tr
This news is a total 1226 time has been read