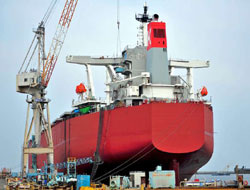 Asian shipbuilders face an abrupt downturn in demand that could result in some yards going bankrupt as ship owners cancel or postpone orders, according to executives, bankers and analysts.

Asian shipbuilders face an abrupt downturn in demand that could result in some yards going bankrupt as ship owners cancel or postpone orders, according to executives, bankers and analysts.

The problems could be particularly acute in China, which is now challenging South Korea as the world's leading shipbuilding nation but where many of the new yards are privately owned and rely on additional funding for their expansion.

The shipbuilders' problems stem from those of both the shipping and banking sectors, as a slowdown in trading is compounded by the inability or reluctance of banks to extend financing for orders.

The Baltic Dry Index (BDI), the global benchmark for the cost of shipping commodities, has slumped to a quarter of its level four months ago.

"We are now seeing banks withdrawing financing options for new ships," said Arthur Bowring, managing director of the Hong Kong Shipowners' Association. "To have built up such a large shipyard capacity is quite worrying in such doubtful economic times."

Asian shipyards filled their order books until 2011 on the back of a decade-long Asian economic boom. That still provides a cushion for larger and more efficient yards, but some Chinese fledgling companies now scramble to put refund guarantees in place to secure contracts.

"Activity has come off very rapidly right across the board, with the big ships affected most," said Michael Birley, managing director of shipbroker Wallem. "I'm sure that there are orders now which are not being completed."

As many as seven Chinese shipbuilders had earmarked initial public offerings to fund their rapid growth. Some have instead been seeking hundreds of millions of dollars in institutional funds, bankers say.

Rongsheng, which had planned a $1bn IPO, is now trying to raise about $300m. Other shipbuilders that are expected to need additional capital soon include Titan, New Times and New Century.

However, banks are adding stringent covenants when financing vessels, as well as lowering the advance rate of their financing to about 60 per cent of shipbuilding costs from about 80 per cent.

Shares in Korean shipbuilders plunged yesterday, led by Daewoo Shipbuilding & Marine Engineering, amid concern that the downturn could force Korea Development Bank and Korea Asset Management to cancel the sale of their 50.4 per cent stake in Daewoo Shipbuilding.

Analysts also point to an abrupt slump in the second-hand market. Second-hand ships had been trading at a premium to new buildings because of the long lead time before delivery.

Last month, however, prices for vintage dry bulkers fell as much as 40 per cent, according to Christoph de Buys Roessingh, founder of Roland Capital, a shipping consultant.

"The next question is how much of the new buildings will not be built," he said. "That's hard to answer, but my estimate is that anything between 10 and 30 per cent of the order book for dry bulk might not be built, with the smaller units likely to be affected the most."