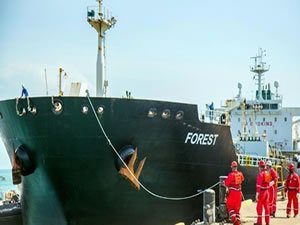 The first of three Iranian tankers carrying fuel to Venezuela is set to arrive Monday night, demonstrating the ability of the Iranian and Venezuelan governments to bypass American sanctions on a limited basis.

The tanker Forest will arrive at the El Palito refinery near Puerto Cabello sometime Monday night, according to TankerTrackers.com, bringing with her a cargo of much-needed gasoline for Venezuelan consumers.

Two more, the Fortune and the Faxon, are expected on October 1 and October 4, respectively. All three are Iranian-flagged and Iranian-operated.

Venezuela is in the midst of a dire fuel shortage, driven by a combination of tough U.S. sanctions and a long-term decline in the maintenance of its refineries.

Early this year, the government of Venezuelan President Nicolas Maduro reached an agreement with Iran for the delivery of five tanker cargoes (about 1.5 million barrels) of gasoline.

The Forest, Faxon and Fortune were part of that shipment, along with the Iranian tankers Petunia and Clavel.

The United States added the masters of all five ships to its travel and banking blacklist for their involvement. In July, the United States seized a second consignment of 1.1 million barrels of Iranian-sourced gasoline aboard four foreign-flagged, Greek-operated ships.

The vessels were allegedly bound for Venezuela, and the shipowners agreed voluntarily to transfer the fuel to U.S.-chartered tankers instead.

One of the two receiving tankers is currently anchored off Houston, and the second is under way for New York.

The original cargo owners in this interrupted transaction have filed suit in U.S. courts to recover possession of the fuel, admitting that it is Iranian in origin.

The firms - which named themselves in court filings as Mobin International Ltd., Oman Fuel and Sohar Fuel - said that they had purchased and then resold the cargoes to a UAE-based company, Citi Energy FZC.

This news is a total 2502 time has been read
Tags: Three Iranian Tankers Approach Venezuela With Sanctioned Fuel Cargoes