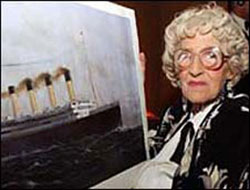 The last Titanic survivor, Millvina Dean, is selling personal items and momentoes of the Titanic obtained by her family, which was on the doomed ship.

The auction is expected to fetch $5150 in US dollars

The last Titanic survivor, Millvina Dean, is selling personal items and momentoes of the Titanic obtained by her family, which was on the doomed ship.

Millvina Dean was a two month infant when the Titanic drowned in the Atlantic. She is now 96 years old and lives in a nursing home. With no money to pay for her nursing home care, Millvina Dean, has now decided to auction her famed possessions.

Millvina"s family was on the ship after the family decided to emigrate to the United States and live in Kansas. But tragedy struck even before they reach American soil. Millvina along with her brother and mother (Eva Dean) was put in a lifeboat. Her father, Bertram Dean, did not make it and drowned with the ship. The family was travelling third class on the Titanic.

The auction is expected to fetch her 3000 British Pounds which is about $5150 in US dollars. Among the items that will be sold are a 100 year old suitcase and rare prints of the Titanic. The old suitcase was given to her family after they were rescued. It is said to have contained clothes for the family, which lost everything including their breadwinner with the ship. The rare prints of the Titanic were sent to her mother from the Titanic Relief fund and is said to have been signed by a number of popular artists of that time.

This news is a total 665 time has been read