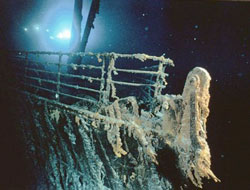 A ticket for the Titanic's ill-fated voyage that belonged to the last survivor with memories of the disaster sold to a collector from the United States at a British auction Saturday.

A ticket for the Titanic's ill-fated voyage that belonged to the last survivor with memories of the disaster sold to a collector from the United States at a British auction Saturday.

Lillian Asplund, who died in 2006 at the age of 99, was 5 years old when the Titanic hit an iceberg and sank during its maiden voyage from England to New York. Her father and three siblings were among the 1,500 people who died.

She was the last American survivor of the disaster and the last with memories of it. Others had been too young at the time of the sinking to recall their experience.

Another key item sold from Asplund's collection was her father's pocket watch, which reportedly stopped at the exact moment the ship sank in April 1912.

Aldridge said the hands of the watch were stopped at 2:19 a.m., when Asplund's father Carl fell into the North Atlantic and seconds before the Titanic disappeared beneath the waves.

The watch was bought by a Swedish collector for $61,786, Aldridge said.

He said most of Asplund's collection of 364 items - which included rare photographs of the Titanic and post cards printed to mark the voyage - had been sold at Saturday's auction.

The lots were previously kept at Asplund's home in Massachusetts and have never been seen before in public, he said.

Her collection is "one of the most important of its type to be offered in recent years," Aldridge said. Asplund's parents, Carl and Selma, and their five children were traveling on the Titanic as they headed from their home in Sweden to the U.S. to make a new life in Worcester, Mass., Aldridge said.

Lillian, her youngest sibling, Felix, and their mother, Selma, all survived the sinking.